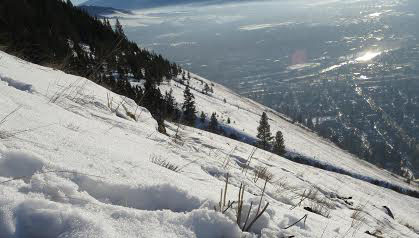 Canine Photographed on Mt. Jumbo Determined to be Domestic Dog
By angelamontana 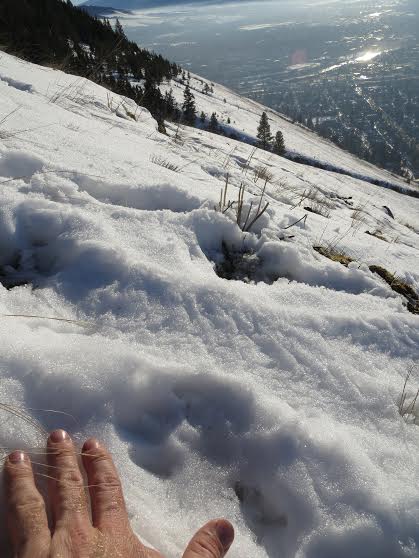 On February 4, Missoula resident, Brian Nostrant, took a photograph of a group of elk and a black canine on Mount Jumbo that looked very much like a wolf.  The photo stirred a lot of public interest and a response from FWP and Missoula Parks and Recreation officials.

“The photo certainly resembled a wolf, and we know that wolves occur around the Missoula Valley,” said Liz Bradley, FWP’s wildlife biologist in Missoula.   “It wouldn’t be surprising to see a wolf on Mount Jumbo.”

Bradley spoke with Nostrant in the afternoon of February 9, and was able to guide FWP Wolf Specialist, Tyler Parks, via cell phone, to the spot where Nostrant had witnessed and photographed the possible wolves. Parks and Bradley were able to match-up observations on the mountain with Nostrant’s observations from his house. Then Parks followed the tracks, determined to be from two dogs, to the “L.”

“There were two dogs, one larger than the other,” Parks reported, in reference to the tracks.  “The prints could be distinguished from a wolf by their shape and smaller size.  And then, the fact that they led back down to the L Trail was pretty conclusive.”

Mike Johnson, a Missoula outdoorsman who has volunteered with FWP for many years, also watched the elk and canine last week from his vantage point at the Hellgate Conoco station with owner, Ross Grenfell.

“Ross and I were watching the dog and elk through binoculars, and at first, we thought maybe we were seeing a wolf,” Johnson said.

Johnson headed to his home, got his binoculars and watched the dog run across Mount Jumbo.

“Ross and I were communicating by phone, and when it got out of my sight, he said it ran down to a hiker with another dog on the L Trail. He accepted the dog, which joined them for the rest of their journey.”

Mount Jumbo was acquired by the City of Missoula and FWP in 1996 to protect winter habitat for elk and to minimize disturbance to the elk that spend part of their winter there.

“Off-leash dogs chasing wildlife in the winter is extremely stressful to elk and other wild animals and is illegal,” said Morgan Valliant, Missoula Parks and Recreation Conservation Lands Manager.  “It also threatens the exception to the Mt. Jumbo winter closure which allows the public to hike to the “L” and along the US West trail when the rest of the mountain is closed.”

The “South Zone” of Jumbo is closed to the public from December 1 until March 15, and the “North Zone” is closed untilMay 1.  The L Trail and the U.S. West Trail above Interstate 90 are open to the public year-round.   Dogs are required to be on leash in these areas.

“Seeing elk in the winter on Jumbo from downtown Missoula is one of the things that makes living here special,” Bradley said.   “And it reminds us that the elk are here in the winter to find food where snow levels are less and to minimize stress during this critical time of year.  The best we can do is give them space and keep pets close. ”

FWP and the City of Missoula encourage residents to call 911 or 1800-TIP-MONT if they see a person hiking in Jumbo’s seasonally closed areas or with a dog off leash.