Long range precision rifle shooting is an extremely fast growing shooting discipline. Long barreled, heavy bolt action rifles are the norm and most are built on the fabled Remington 700 action. These rifles can cost thousands and then you need to buy a scope which depending on your budget can cost even more than you tack driving rifle. Well now Ruger® has changed the game with its new Ruger Precision Rifle (RPR).

The 6.5 Creedmoor was developed a few years ago by Hornady as a precision rifle cartridge. While there are other 6.5 cartridges on the market (e.g. .260 Remington, 6.5×47 Lapua), Hornady provides more factory support for their 6.5 Creedmoor than any other ammunition manufacturer. Personally, I have had great service when I needed help from Hornady and I highly recommend their products, especially their reloading equipment. The greatest asset of the 6.5 Creedmoor is its long bullets with a high BC. This makes for a bullet that retains velocity and limits wind drift at very long ranges. 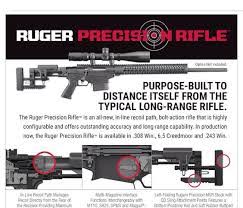 Now let’s look at the RPR. Nearly every component with the exception of the receiver and the bolt can be interchanged with aftermarket products and there are already many manufacturers ready with upgrades for the shooters who want more. The bolt of the RPR has three lugs like the Ruger® American Rifle. With a short 70° bolt throw, the RPR’s bolt is claimed to hold the cartridge in better alignment with the bore than

the more common two lug style. The forearm is a free floated AR style and the butt stock is adjustable for length of pull and comb height and is foldable as well.

Barrels on the RPR are chrome moly steel and hammer forged with 5R rifling. They are medium contour with a .75 inch diameter at the muzzle. The muzzles are threaded for the additi 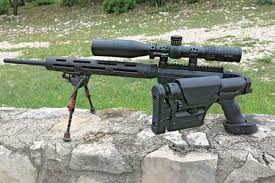 on of a muzzle break or a suppressor.

The receiver is composed of two “halves”, an “upper” and “lower.” The “upper” and the bolt are made of the same steel as the barrels and the “lower” is made from aerospace aluminum and is hard coat anodized. This makes for a very durable unit. The receiver also has 20 MOA built into it giving the shooter more options for scope mounting. The rifle uses detachable magazines. Ruger® has given great versatility to the gun as it can use its patent-pending multi-magazine interface functions interchangeably with M110, SR25, D 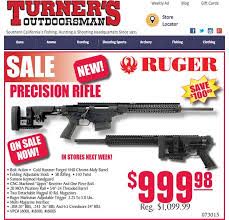 PMS and Magpul-style magazines and AICS magazines (works with some M-14 magazines).

add a good scope and mounts and the scale will tip between 13 and 14 pounds. Not a good mountain rifle, but ideal for long range competition. Now the best part of the RPR is the price; suggested retail, $ 1399. Street prices can be found for around 1000 bucks. Not much for a rifle that consistently shoots sub MOA groups. 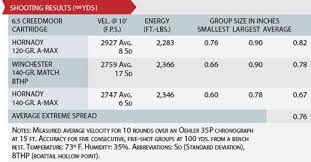 If you want to play some of the long range accuracy games or just want to “clang” some steel at 1000 yards, then the Ruger® RPR is the entry level gun for you.