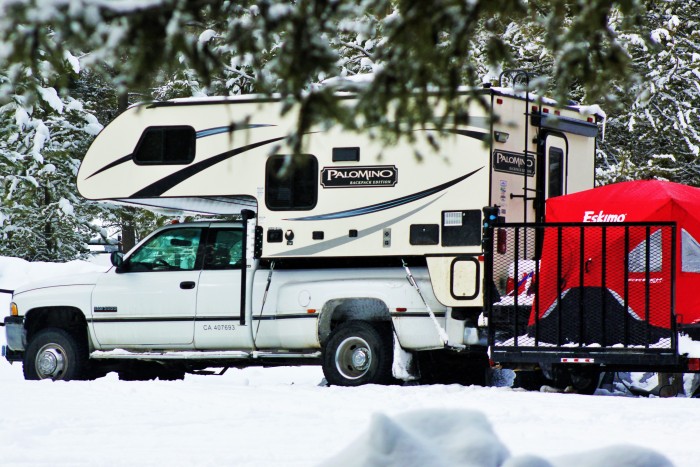 Suspicious people stopped in at the Forest Service building in Darby, MT in Late January claiming to be wolf hunters and asking a lot of questions about where to find wolf tracks and trapping locations.  The full sized white dodge pick up truck with a bed camper and trailer with snow mobiles and modified atv’s has been driving into trappers locations and walking around traps.  The NRA stickers and gun toting passengers think they are blending in.

When confronted they have made up a variety of stories from “we are an independent film company” to “we are here to capture video of wolves”.”  They are armed with AR 15 rifles and carry them conspicuously on their backs while camping at various trail heads in the National Forest Service areas.  As you might expect from a group of city dwellers, they don’t travel far from residential areas and snowmobile tracks seem to follow easy trails.  However trappers have reported suspicious activity on trap lines and hunters are feeling threatened.

These animal rights activists are apparently a crew of three, two men and a woman, who have travelled from Los Angeles, California calling themselves the “Wolf Patrol”.   This L.A. Based group from Lockwood Animal Rescue Center (LARC) has posted photos of their “wolf Patrol” on duty in a secret wilderness location on their facebook page.  That secret location is no secret, they are in the Darby area and don’t leave paved roads.  But Being from L.A. Darby, MT probably does feel like the wilderness.

This group has claimed that they’ve interviewed hunters, trappers and pro-wolf advocates in an effort to gather objective information about wolves but so far no one has said they were interviewed, including the people the Animal rightists claimed to have interviewed.

This man who says his name is Steve claims to be an independent film maker who is camping in Darby, MT to film wolves. This photo taken from the LARC facebook page (photo credit below) tells a different story.

The LARC facebook page shows the reality of this groups mission, to find trappers, traps and to video wolves being legally hunted so they can show the world that Montanan’s are a bunch of murderers.  I wonder how their video will go if they capture a wolf eating the fetus of a cow elk and leaving the rest to the birds or a horse in a pasture  with its haunches missing.  Or if another dog is ripped from its dog house this year or 100 sheep are slaughtered and left to waste.

But it likely doesn’t matter what they capture or don’t capture.  Their story will be the same, that wolves are a majestic creature that should be worshipped and honored while all the other wildlife and domestic animals become second rate citizens in the natural world.

The USFS and MTFWP have been notified and we recommend that you let them do their job.   In the meantime,  keep your eye out for this malicious group and keep safe out there.

The feature photo was taken from “the elk patrol” a group of dedicated sportsmen keeping an eye on malicious groups like the LARC wolf patrol.