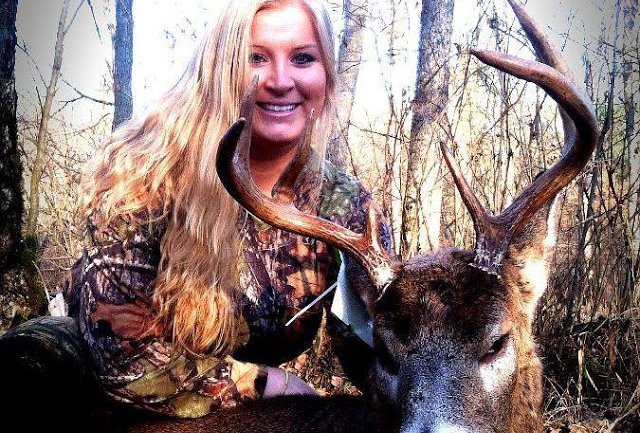 Here is some information that a trapper out of Wisconsin posted, and, as a woman and a sportsman, I found it quite interesting and pretty much dead-on in many ways.  Skye Goode is her name, and you can check out her full blog here.  Now, don’t get me wrong…..I am all about hunting with my guy, as I am obsessed with sharing those super awesome hunting, fishing and trapping moments with him, but with technology, it is possible to feel like you’re there without actually being there.  You can now capture moments like that on video and not only have them in your memory bank but also on a hard drive.

As a huntress, I can SO relate to what Skye has to say, as before I met Jason, I only bow hunted on my own.  At the same time, I’m glad to have him around to incorporate into my memories, whether it be via video, photos and in my head, and to share the thrill of catching up to and successfully harvesting an animal you have been hunting.

What do you think about this?

A few seasons ago I missed a huge buck.  Like huge.  I estimated he was at 25 yards but when I checked after the shot he was at 34 yards.  The arrow went right under his belly.   I cried, gave up hunting, then cried some more.  I was alone in the swamp and didn’t have anyone to range for me, tell me to draw back, tell me to watch for that limb, tell me that he was at 34 yards, etc.  I had to make that mistake on my own and it still haunts me when I think about it.  But redemption was sweet the next week when I shot a nice buck to fill my archery tag for that season.

Now sometimes we have hunting mentors or get the rare opportunity to hunt with a veteran hunter who will have a vast amount of knowledge to share with you so you can avoid a few mistakes.   This is an opportunity that you do not pass.  If you get an invite to accompany an old-timer on his trapline, you better be calling into work sick that day.  This is a great way for you to learn how to gut your own deer, set your own traps, fillet your own fish, etc.  The point I’m making here is to make sure that you spend an equal or greater amount of time in the woods alone, making stupid mistakes which will guarantee to make you a better hunter.

Now don’t get me wrong.  It is always fun to spend time with a spouse, family member, or friend in the woods.  I’m not trying to come across as some bra-burning womens’ rights crazypants.  The point I’m trying to get across is that if you are going to take on the responsibility of being an outdoorsman, you need to make sure you’re doing it for the right reasons and not because it’s “cool”.  So, if you can accomplish the same feats in the woods solo that you can while with a friend, and you genuinely live to hunt, then you know that you are there for the right reasons.   If you need someone else to tell you how to load your gun, or where to sit, or if you can’t tell which direction the wind is out of, please, stop.  If you don’t dare set foot in the woods because you don’t know what to do on your own, then please, stop.