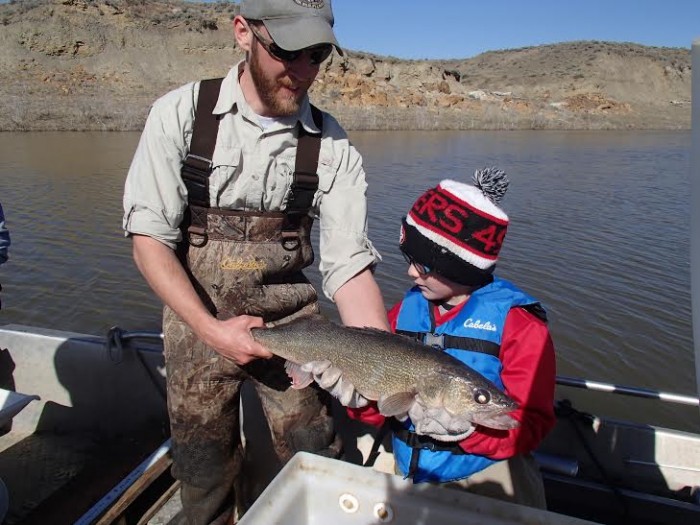 Warmer temperatures and melted ice mean the annual walleye spawning operation on Fort Peck Reservoir is beginning early this year and will soon be in full swing.  Volunteers are always welcome, and needed, for the success of this operation.

According to Heath Headley, Montana Department of Fish, Wildlife & Parks’ Fort Peck biologist, agency staff and volunteers will again be trapping fish and taking eggs from areas in the upper Big Dry Arm of the reservoir. “The reservoir is about 2 feet lower than last year,” Headley said, “but we will continue to  focus the operation near Nelson Creek.”

FWP staff have been working on setting up spawning barges, holding pens, and test nets since the last week in March.  Headley hopes to be in full operation now in early April.  “If the test nets have enough ripe walleye in them to start spawning, we will begin a full operation immediately,” Headley said. “We plan on needing full crews (including volunteers) from the beginning of April through the end of April, but we have gone into May in the past.  We are looking to continue until we have our goal for this year, which is 50-60 million eggs.”

Walleye spawning activity on Fort Peck Reservoir usually doesn’t pick up until the second or third week of April, and the peak typically takes place somewhere between April 18 – 21.  However, the timing and success of the spawn is heavily dependent on water temperature, which can fluctuate greatly.  Headley noted, “The activities of fish are very dependent on water temperatures.  And you never know what is going to happen with spring weather in eastern Montana.”

Last year, FWP staff and volunteers captured 18 different fish species for a total of 5,280 fish from March 31-April 23.  Of that total, 1,740 were walleye.  Female walleye collected averaged 7.6 pounds, with males averaging 2.9 pounds.  The biggest walleye measured was 15.9 pounds and 32.4 inches.

64 million walleye eggs were collected from the ripe females. From those eggs, 3.6-million fingerlings and 25.3-million fry were stocked back into Fort Peck Reservoir.  Various other walleye waters throughout the state are also supplied with fish as a result of this annual egg-taking effort.

Volunteers, Headley says, are key to the operation. “We wouldn’t be able to set all the trap nets, collect fish, and spawn them on a daily basis unless we had help,” he explained. “Volunteers are the main reason this has been so successful over the years.”

Prospective volunteers who contact Headley at 406-526-3471, EXT 206, will receive an information packet containing a self-addressed envelope and volunteer form, which must be completed and signed.  Parents or guardians must sign the form for minors.

“Folks are asked to supply their preferred dates to volunteer, so they should list the dates they desire,” Headley said. “We will call to confirm the dates, so it’s important for volunteers to provide us with phone numbers where they can be reached both day and night.  It should be noted that most weekends are nearly full.”

FWP will supply waders, raincoats, and cotton gloves, but volunteers should bring the following:

Each day of the operation starts at 8 a.m. in the conference room at the Fort Peck Hatchery.  FWP will provide transportation from the hatchery to the spawning sites and back.

For those folks not able to volunteer, but who still want to keep up with the spawning activity, there is another avenue of outreach.  Marc Kloker, Region 6 Information and Education Program Manager, will be posting frequent updates from Headley about the walleye spawn to the Region 6 Facebook page.  Updates will include current efforts and status, data on fish and eggs collected, and photos and videos.

“This will be a great way to keep the interested public updated on our egg-collecting efforts on a weekly basis,” Kloker said.  “Providing photos and videos of the fish, volunteers, and the operation in general will give everyone a virtual first-hand experience.  Please “like” and “follow” by going to the Region 6 Facebook page atfacebook.com/MontanaFWP.R6.

Feature photo:  FWP Reservoir Biologist Heath Headley, during the spawning effort in 2015, with a young volunteer.