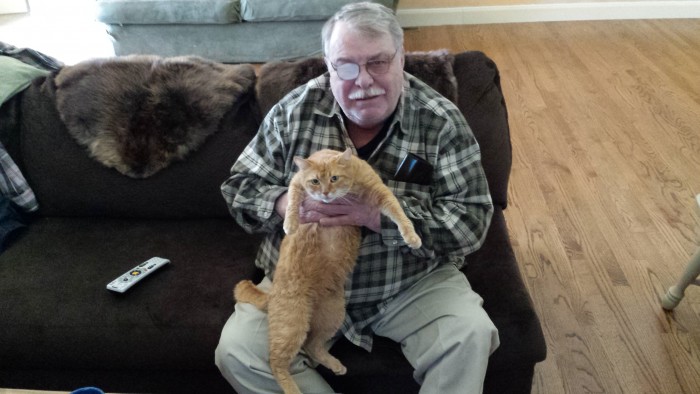 Pet owners know that pets can go missing sometimes and for Montana resident Harry Smash Marvin and his Dad’s cat “Tommy” the days spent apart were worrisome and frustrating.

Harry Smash’s father “Big Harry”  is relocating from his home far away to live right next to Harry Smash.  The process of moving is an arduous one and it isn’t easy getting all your life belongings in one place.

One of Big Harry’s prized possessions is a cat named  Tommy which came to live with Harry Smash about five days before Big Harry arrived.  Like most house cats Tommy wasn’t so sure about the new residence and in a brief moment of distraction (not so rare for Harry Smash) Tommy escaped into the darkness.

For several days Harry Smash tried to lure Tommy back home with food and niceties but when he didn’t see the feline he began asking neighbors if they had seen Tommy.  No one had seen Tommy but several mentioned a red fox lurking in the area.

Fearing the worst Harry Smash decided to set a trap hoping that he could keep the fox away from Tommy and to have Tommy home safe and sound before Big Harry arrived.

After more than five days of searching Tommy was found trapped the day after Big Harry arrived.  A heart felt text message went out with a photo simply captioned “trappers  rule” showing Tommy caught in a trap that had been baited with smoked oysters the previous day.

Trapping is often the preferred method for capturing and relocating threatened and endangered species and is used worldwide as a wildlife management tool.  As it turns out it’s also effective in little towns in Montana for getting dad’s cat back in the house and away from predacious fox.

Just further evidence that trapping is a viable and necessary tool that is (thankfully) available to every citizen of Montana.  Rock on trappers!