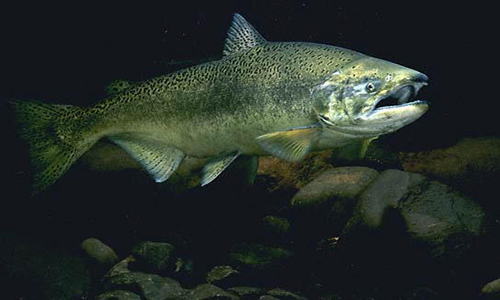 Salmon Return Forecast Not Good For Idaho
By Toby Trigger

Salmon Returns over Bonneville Dam last year at this time exceeded  87, 375 adults  and the Lower Granite boasted 3, 555.   This year it’s not so good in fact it’s poor.  Just 16, 970 have been counted travelling through the waters at Bonneville and 376 adults at the Lower Granite Dam according to reports from the Idaho Fish and Game.  To be fair the returns in 2016 were exceptional.  But this year’s returns are about 20% of what they were last year and it’s about half of the 5 year average.

Further research by the Northwest Fisheries Science Center calculate predictions for returns based on things like amount of lipids that zooplankton carry around with them in the ocean.

According to those scientists from the Northwest Fisheries Science Center (NWFSC) the zooplankton community remained in a lipid depleted state “throughout 2015, and was dominated by small tropical and sub-tropical copepods and gelatinous zooplankton that generally indicate poor feeding conditions for small fishes upon which juvenile salmon feed.”

For the laymen in this group (myself included) this means that the food available for the juvenile salmon to eat was poor which made for a bunch of hungry fish – which didn’t survive.

An increase in temperature due to El-Nino conditions created a “Temperature Blob” right where the young fish go to grow and it was harmful for a bunch of reasons.  What this means for hopeful salmon anglers is that the year 2016 is not going to be anything like 2015.

In fact it’s going to be rough.  The salmon season opened in areas of Idaho on April 23rd and will remain open until further notice.  In the mean time it might be a good year to make plans to head east and try paddlefish fishing.