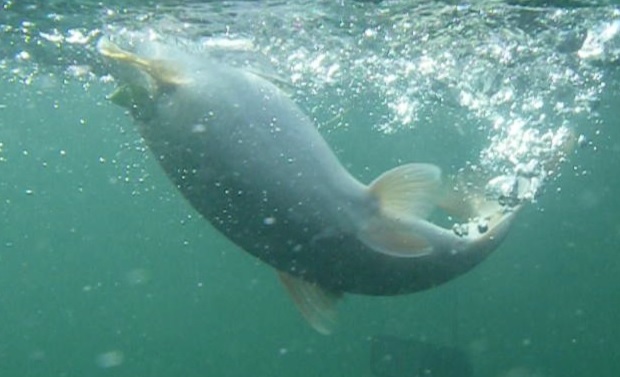 After fifty one days of lake trout fishing on Flathead Lake 2016 Spring Mack Days on Flathead Lake ended with a total of 34,687 lake trout entries which is the second highest total of the events since it began in 2002. The 2012 Spring Event total of 38,085 still holds the record for the total number of entries. Strong winds hampered the lake trout anglers the last two weekends of the event. The wind weary anglers were struggling with low numbers while battling the waves and wind but still put in hours of fishing.

Each and every angler is part of the success of the Mack Days Events. The anglers are helping to make a difference by being a part of the fishing events. The Confederated Salish and Kootenai Tribes sponsor Mack Days with Up to $225,000 in the Spring Event. The fishing events are used as a tool to lower numbers of non-native lake trout in Flathead Lake and increase the once abundant bull trout and westslope cutthroat trout in the lake. These native fish are an important part of the history and culture of the lake wide system and were once the dominate fish in the lake. Thank you to every angler who supports or participated in 2016 Spring Mack Days.

Special Spirit of the Event Winners were Ryan Shima and Jason Mahlen both of Kalispell. Each of the anglers exemplifies what the events are about in their sportsmanship and in their angling expertise, courtesy, and helpfulness.

Golden Angler award went to Larry Karper of Florence with 697 and Bob Christensen of Missoula was second with 273.

Marty Noyd of Missoula won the Last Day Largest Fish under 30” with an 8.2# lake trout and 2nd place went to youth angler Dalton Kluesner of Missoula with a 6.9# lake trout.