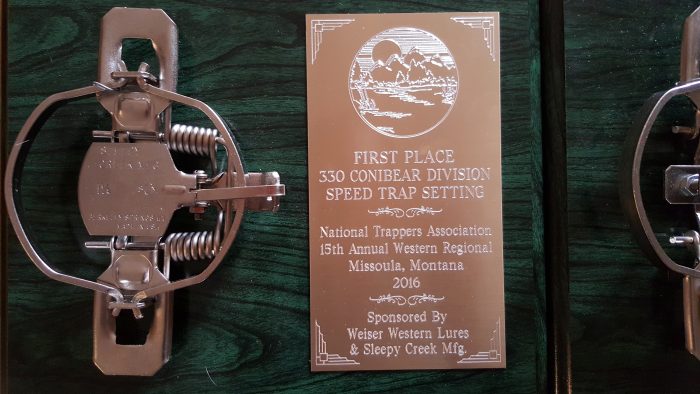 The Art of Setting a Trap Fast [PICS]
By Toby Trigger

Setting a trap may not seem like a competitive event but for people who set traps 100 days or more each year it takes on different view point. Setting traps fast means more efficiency on the trap line but there are some differences in technique between trap line trap setting and competitive trap setting.

Trappers events are held all over the country and in the interest of carrying on trappers traditions contests have become an integral part of trappers events.  And with so many trap models on the market it isn’t always easy to learn the techniques required to shave three seconds off your trap setting time.

Speed setting is when five or six taps are placed in front of competitors which the contestant has the choice of how to lay them out before the timer starts.  Each trap is of a different model and style and once the traps are situated the way the contestant wants them the timers wait until his or her hands touch the traps to begin timing.  Each trap is set as fast as possible and must remain set.  It usually takes under one minute to set five or six traps but the fastest trap setters can get it done in under 30 seconds.

The 330 Conibear setting contest is one trap, one trap setter and one goal: to get it set as fast as possible.  A 330 conibear is a body grip trap that isn’t complicated but the springs are tough requiring strong hands and good technique to get it set in less than 10 seconds or so.  The fastest trap setters set 330 conibears in 4 seconds or less.

The competitor stands over the trap in the ready position and compresses the spring by laying upper body weight onto the trap springs by grabbing the top of the spring and pushing it to the ground. The springs are gripped and lifted to the pivot point and one leg moves back, the other drops squarely onto the top of the trap jaws opening th 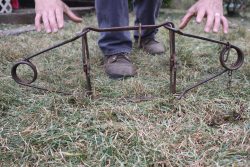 em as they flatten out on the ground. 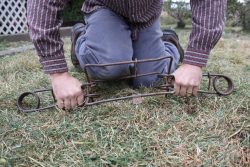 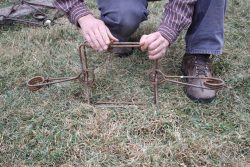 At this point the trap jaws are opened, the springs are fully compressed. The next steps are to stand the trap up while gripping the outside of the trap jaws and drop the dog onto the trigger groove and let go. And again, this all happens in less than 4 seconds for the best trap setters. 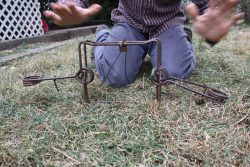 The 330 trap setting competition is held at most trappers rendezvous along with other contests like the bare foot bear trap setting, and speed setting competitions. The thing about setting a 330 using these techniques is that there are traps that simply cannot be set his way even by veteran competitors. One trapper named Matt Lumley who likes to compete and does well at various events told me about a recent competition where the organizers used a brand new# 330 Super X Belisle trap for the contest. “I had to use the trap setters for that one.” Lumley said.

New 330 body grip traps come with safety hooks and for good reason. These traps are tough. And while no one wants a worn out 330 with weak springs on their trap line or in a competition, the trap has to be compressible by human hands in order to be used in a competition. Watching one third of the competition take nearly one minute to set a trap makes me appreciate watching the competitors who can do it in 4 seconds or less. There is a “wow” factor in this competition. Spectators want to see a show and like a race car smashing into the wall, spectators want to see a few people struggle during a contest. That’s what keeps it interesting.

The next time you’re at a trappers event look for the trap setting contest sign-up sheet and have fun testing your skills against other competitors.