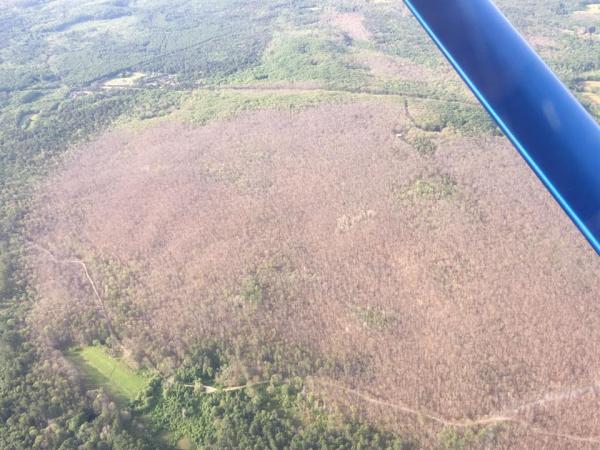 Photo of forest without foliage via pilot Jon Pascua over Exeter, RI

Some people love to randomly find caterpillars while hiking around in the woods.  They will pick one up and let it crawl around on their hand and kids will giggle at the fuzzy, little creatures.  But, what happens when there is an infestation of caterpillars?  Rhode Island found out this year, according to patch.com.

Rhode Island has been hit hard by large caterpillar concentrations this year, especially in South and Kent Counties. In North Kingstown and South Kingstown, on a ride to the beach, the sides of Route 1 look as if the trees have just begun to bud. Residents across the state have watched their yards become skeletal and endured the rain of caterpillar poop falling from above for weeks.

“Unsightly” trees lacking foliage leads to a larger issue, as without foliage, the sun makes it to the ground, drying up even more of the area, posing a higher fire threat.  Although this has happened in the past, what caused this year’s influx?

This year’s infestation is likely caused by the abnormally dry conditions this spring. Gypsy moth populations are normally balanced by a virus and a fungus that kill the caterpillars. Both of which were hampered by the dry weather.

Rhode Island’s Department of Environmental Protection is urging people to be “extra careful not to start a fire that could rapidly become a massive blaze.”  So, as you can see, every state has issues they are dealing with.  Many of our fires in Montana start with lightning, and it shows just how one factor, such as weather, can throw off an entire process.