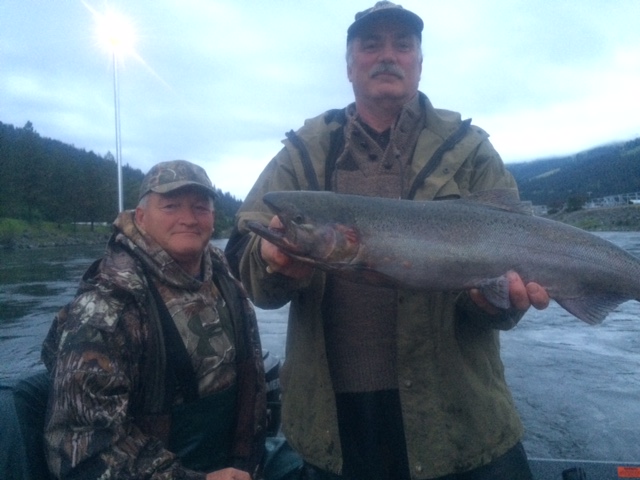 It Started with a Phone Call: Captain’s Column 6.2.16
By angelamontana

When I received a phone call a couple of weeks ago from my buddy Jim Swanson of Polson outlining his plan for a salmon fishing trip in Idaho and then asking me if I would like to join him I couldn’t resist. At the time I was fishing for walleye on Fort Peck and the closeness of the two fishing trips would take a little duty juggling on my part and even more understanding from my girlfriend Berny for me to go. Well I was able to get my work responsibilities handled and Berny had no problem with me going if there was a remote possibility of me bringing home some salmon.

The spring salmon run on the Clearwater River is an annual event for them and they usually catch their fair share of the salmon that have swam their way up river from the Pacific Ocean. In years past I have made an attempt to catch these prized salmon. I was successful a couple of years ago when I went on a guided trip with top guide Scott Willumsen from the Guide Shop in Orofino.

Not only do I lack the knowledge to catch salmon on my own, while fishing the Clearwater River, but I also don’t have the preferred salmon fishing boat which ideally would be equipped with a jet motor as well as a kicker trolling motor with prop for back trolling. There are other ways to catch salmon other using a boat on the Clearwater as some anglers have success fishing from the bank with a slip bobber and a jig.

The salmon bite was tough for the first couple of days but we still managed to catch our limit, which is one salmon per day per angler. There were a few things that I learned from Swanson and Morgan that I would like to pass on to you that might help you in catching salmon. There were two different baits that we used behind the jet divers as we back trolled. Probably the most popular bait for anglers is salmon eggs. The eggs are held on a barbless hook that is tied in such a way that the fishing line is used as synch to tighten the eggs snug up against the hook. It is important that when your eggs are in the water that they do not turn or spin with the current. They should just drift along so they look natural to the fish. 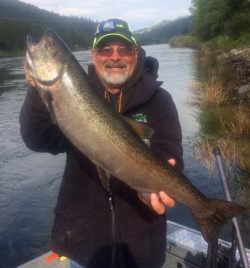 Sometimes this takes several reconfigurations of the eggs so they don’t spin. The final step is to squirt a special mix of anise and shrimp oil on the eggs. That kills most of the human scent and adds a smell that the fish crave. Some anglers also use plastic gloves when handling bait to eliminate unwanted scent. The other bait we used was a silver/green kwik fish that had tuna wrapped to its underbelly around the up treble hook. They would also poor tuna juice over the tuna from a bumblebee tuna can before putting the kwik fish in the water.

Kwik fish I was told are more effective as the water temperature warms to around 50 degrees. We ended up catching about 50 percent of our fish on each the baits. The salmon bite was early on most days around 5am till 7am, but we did catch salmon later in the morning too. To view pictures of Swanson and Morgan and some nice salmon, look at the attached pictures. 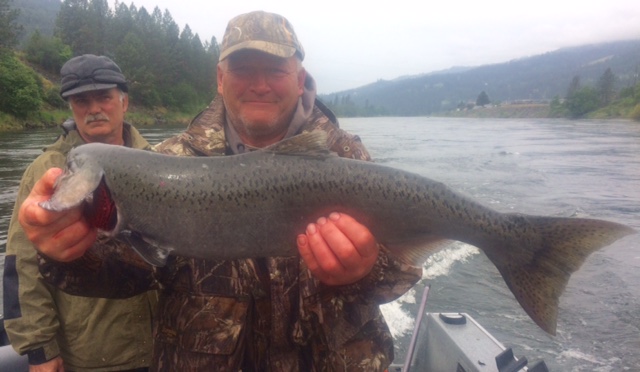