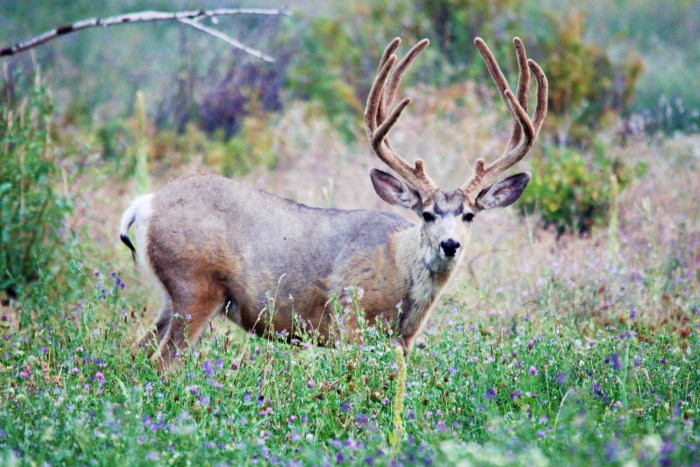 After weathering a significant decline in recent years, the mule deer population in southeastern Montana is showing signs of a robust recovery. With populations well above long-term averages, Montana Fish, Wildlife & Parks proposes increasing the 2016 antlerless mule deer “B” license quota from 4,500 to 7,500 throughout Region 7.

The Montana Fish & Wildlife Commission endorsed that request Thursday during its June meeting in Dillon. Public comment will be accepted through Friday, June 24 at 5 p.m., and the commission will vote during its July 13 meeting.

“Since 2012 we have had open winters, great browse recovery, high fawn and recruitment rates,” Regional Supervisor Brad Schmitz explained. “Amazing how Mother Nature compensates, quietly and quickly. Our data is solid: we have lots of mule deer in Region 7 now.”

The commission also approved Region 7’s request to increase the biennial mule deer B license quota range from 5,500 to 11,000. Prior to the severe winters of 2010 and 2011, the upper quota range was 11,000. Based on positive spring surveys of mule deer, Region 7 is seeking to restore that ceiling in order to further increase mule deer B licenses for 2017 if needed. The public comment deadline for this is also June 24.

Back-to-back harsh winters in 2010 and 2011 drastically reduced mule deer numbers in Region 7. Spring surveys from 2012 conducted across 14 trend areas bottomed out at 61 percent of long-term average. In response to the decline, mule deer B tags were cut by 90 percent, then in 2014 a statewide moratorium on doe harvest was implemented. In 2015, B tags were available only in hunting districts with populations at or above long-term averages.

Since their low point in 2012, mule deer have been on a strong upward trajectory. Recently concluded aerial spring surveys show populations are 47 percent above long-term average, and fawn recruitment is 56 fawns per 100 adults. Last year was even better, with 67 fawns to 100 adults. This year’s overall counts are the highest recorded since 1998, with all hunting districts either near or above long-term average.

In its February meeting, the Fish & Wildlife Commission approved the return of either-sex/either-species general licenses, plus regionwide mule deer B licenses for 2016.

In addition to excellent recruitment into the population of several  young, fit, productive age classes, recent mild winters and adequate spring rains have played a big role in mule deer recovery. And because of the temporary decline, forage plants also recovered to support growing populations.

Healthy habitat and an increase in mule deer populations is good news, but it also can create problems.

“Vegetatively, and with recruitment, the potential for exponential growth is just on top of us,” Schmitz said.

“If we continue to allow deer populations to grow exponentially, they will reach unsustainable numbers. Habitat degradation will occur, especially to critical winter browse, and biological carrying capacity will be reduced. Reduced carrying capacity, combined with exponentially increasing deer numbers, results in a population that is poised for a crash …”

Regional Wildlife Manager John Ensign explained, “Deer can eat themselves out of house and home. We try to keep deernumbersat a level wherethey don’t destroy the very  resource – habitat –that supports them. We try to set harvest levels wheredeer numbers remain compatible with the habitat and carrying capacity.”

Hot weather has arrived, Schmitz told commissioners, and there will be game damage soon if deer numbers aren’t reduced. With more than three-quarters of Region 7 in private ownership, flexible, region-wide quotas give FWP and landowners a tool to minimize game damage.

“We’re trying to re-implement these tools so we can be ahead of the game,” Schmitz said.

Schmitz acknowledged concerns that mule deer have not sufficiently recovered to increase antlerless quotas. There will always be areas where numbers are lower, he said, but all units are still near or above long-term average.

Many of the deer succumbing to severe winters were mature animals, Foster said, which “kind of reset the clock” for age structure. But there are large, strong age classes coming up, and the next couple of years should be better in terms of mature bucks on the landscape.

In pockets where deer numbers remain lower than desired, private landowners have the option of not allowing doe harvest. And if hunters don’t find deer, the agency and landowners can help them find alternate areas.

Schmitz often hears about “the good old days” when harvests and populations were at their peak, but he said, “You don’t want them to be at peak, because inevitably the high times are followed by a crash.”

“We’ve run the system for close to 30 years, and it’s very effective for us, biologically and socially,” Schmitz said, adding, “folks like this flexibility.”

(This news release is from the Montana FWP http://fwp.mt.gov/news/newsReleases/hunting)