CAMO 4th of July (by the Camo Queen)
By angelamontana

If you are wondering why there is a camo clad man running through the woods throwing fireworks and hooting like a maniac, I am here to tell you to not be too concerned.  That is just the outdoorsman celebrating the 4th of July.  Yes, that is a raccoon skin hat…Yes, he will only answer when called Rambo or Davy Crockett.  Yes, the outdoorsman is proud to be an American.

This is a day when he can legitimately pretend he is Rambo, not like the rest of the time, when he has to justify why he is crouching in a bush with camo war paint on his face.  No, he isn’t some peeping tom, he is most likely staring at the big buck munching on the apple tree in your back yard, but it is still a little odd. Here in Montana, camo clad people are an everyday occurrence, but when they are belly crawling across the parking lot at Home Depot, it is a little disconcerting.  As the girl who has to walk beside the belly crawling guy throwing Black Cats in the parking lot, I am grateful it is only Independence Day once per year.

To be honest with you…being an outdoorsman really is about all of the hard-earned freedoms that we have fought for centuries and I know that I would be the first to say, I wouldn’t mess with an outdoorsman and his right to hunt and fish.  If you really think about it, hunters would be either your best ally or your worst enemy in a freedom fight.  Let’s be serious, they get a kick out of stalking wild animals through the woods, you can’t hiddddeeee…  They love to hike cliffs for days, you can’t runnnnn…  They know how to tie every knot in the book, you can’t escappeeee…I would hate to be the enemy of an outdoorsman. 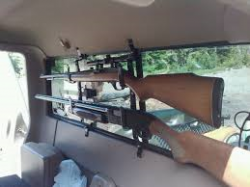 If you think about it, they really would be the dream team of soldiers.  No wonder we never have terrorists daring to dip their toes in Montana soil.  They know how to track, shoot, throw knives, swing an axe, hike for days, and actually enjoy sleeping with rocks wedged in their spines.  All of these skills and mindset really do make a lethal combination.  An army of hunters would be unstoppable.   Just the arsenal that they pack on their bodies would be a bit intimidating… You know those guns and knives hidden in their pockets or the hatchets and rifles strapped to their backs.  If that doesn’t worry an enemy…Then they should be introduced to the outdoorsman’s truck, if the rifle hanging in the back window doesn’t freak them out, I guarantee the rest of the contents are guaranteed to make them wet their pants.  And you know, if they are a really tough puppy, then I promise that the moldy tuna sandwich could still make them barf.  There is nothing that could be pulled from the depths of the truck command center that would surprise me.  MacGyver has got nothing on these guys.

This is the only day of the year that the outdoorsman can hoot, holler and throw explosives without fear of scaring away big bulls and bucks.  The 4th of July is a day, or actually a whole week, he claims, to celebrate freedom.  To celebrate all of the freedoms that the USA provides, most importantly…Wink. Wink…the freedom to hunt and fish in the USA!