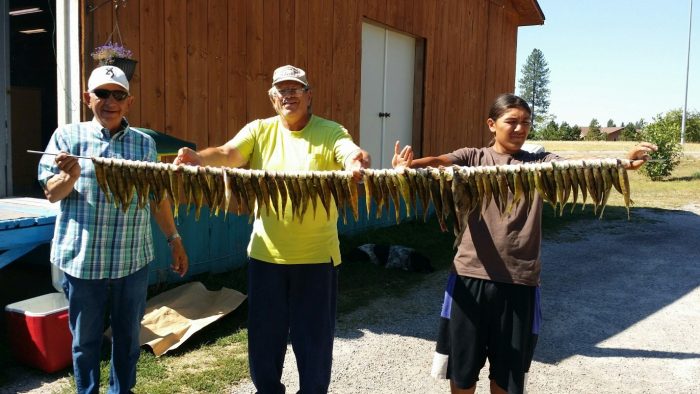 Fishing Report by the Macman (8.29.16)
By angelamontana

The whitefish bite was far better this year than I expected and next year should be even better and last longer.  With the whitefish fishing tapering down the question is “what next?”  And “how much fun can you stand?”   The 19th of August two of my fishing partners, Joe Ferguson, Marlon Star blanket and I headed to the East Bay (East side of Polson Bay) to research the small mouth bass and perch situation.

After not finding much in the deeper water,”14 to 16 feet” in mid bay we moved East and South so we were positioned just north of the mouth of Hell Roaring Creek in a 9 ½ foot depth.

My first cast I had a bite and reeled in two perch.  After having Marlon throw in the anchor I cast again and for two more consecutive times I brought in two fish at a time. At the point I began thinking maybe we were in for a great day of fishing.  86 keeper perch and 7 small mouth bass up to 3 ½ lbs. later I was satisfied.

IN the past on opening day of waterfowl season I’ve had great fishing after the ducks quit flying.

At this juncture there is a super abundance of perch (for the health of the population they need to be thinned) and the numbers of small mouth won’t be threatened by harvesting a few.

WE have developed a new colored hook we called the “perch smile”.  Two of those above a bottom weight bait with a night crawler is deadly for the perch.  A 3” Gary Yamamoto senko fish wacky on a larger “bass smile “worked great for the small mouth as well as larger perch.

Fishing these perch is a great way to introduce the younger set to a positive experience and if they should land a big smallie they’ll definitely be hooked. The Fall Mack Days contest is scheduled to begin September 23rd.

For more information call we at 406-675-0068 email us at: macman@ronan.net   our website is going to undergo a fresh face lift and you can find it at: zimmertackle.com