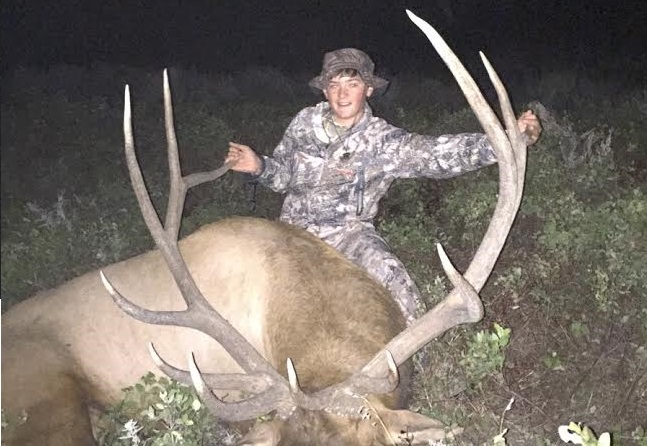 Last year, then 15-old Zach Kinzler, from Bozeman, was at Burke Ranch Outtfitters hunting camp during the same time the Captain was there the first week of archery season.  Check out this young hunter’s recap of an awesome hunt with his dad, Travis, and Kelly Burke with Burke Ranch Outfitters:

As I touched off the release and watched my arrow soar through the air at a bull elk, I was praying I had just shot my first bull.  My goal for the hunt was a bull, any bull, the size did not matter.  I had encounters where I could almost touch elk, but had never let an arrow fly at one before.  I always knew that the day would come but had no idea this was it.  It was September 7, 2015. I was 15 years old.

It seemed like it was weeks ago (it was only three days ago) that the 3:35 school bell rang when I sprung up from my seat and headed out the front door of Bozeman High.  I saw my dad and the truck filled up with hunting gear.  I sprinted over and jumped in and my dad asked, “Are you excited?”

My response, “Does a bear crap in the woods?”

We headed out for the Eastern Montana Breaks for a guided elk hunt with Kelly Burke and Burke Ranch Outfitters out of Glasgow, MT.   I had no idea what to expect because I had never hunted in the “Breaks” before.  It was my mom’s 41st birthday and she gave me and my dad the green light to go hunting.  My dad told me someday I would understand how lucky we were.

We met up with Kelly in Malta, MT.  We headed out of town and onto a dirt road.  As we were driving, Kelly and my dad, Travis, started catching up on how their lives had been since they had seen each other last, over ten years ago. We rolled into a dark camp around 10:30.   Most of our fellow hunters were sleeping since we all would be getting up at four in the morning.

Four in the morning came quickly.  As we walked outside of our tent the smell of eggs and bacon hit my nose.  We ate together as strangers.  We all had the same goal: to take a wapiti.  The group consisted of Taylor, Justin, Scotty, Marty, Mark, a.k.a. “The Captain”, Gene, Kelly and the camp cook Bob.  After breakfast we all headed our separate ways.

The first day of the hunt we saw a lot of elk but didnt have a chance for a shot.  One bull was killed that first day and that was by the “Captain.”

Everyone was very excited to hear his story at dinner. The Captain stood up and said  “I’m gonna tell you guys how to get an elk.” He went on for about an hour. It was hilarious. After all the stories were told and everyone was stuffed full of pork chops we hit the sack.

The next day of hunting was like the first day, we got into a lot of elk but something would happen: the wind would change or something else unlucky. I was starting to think my goal of a bull might be unattainable.

On the last day of our hunt, we had some chances all morning but never got a shot.  I didn’t know what everybody else was thinking.  All I thought was, “Wow, this really sucks to see so many elk but not get a shot”.  We were seeing hundreds of elk but having no luck at getting a shot.

Kelly was still really positive which kept me feeling good.  After lunch I shot my bow with The Captain, Justin and Scotty. They had me shooting from my knees, behind trees, from my bottom.  I could feel myself gaining confidence.  I was prepared for the evening hunt.  I was dialed in, even more than usual.  I had been practicing for this hunt for years.

On our way to our last hunt of the trip, the truck came to a jolting stop and Kelly said, “There’s a rabbit!” I hopped (no pun intended) out of the truck, knocked an arrow with a blunt tip, pulled back and hit my release.  I made a good shot at about 20 yards.  The rabbit was dead so I ran over and grabbed it. Kelly jumped out of the truck and gave me a high five. Then he proceeded to clean it. I asked Kelly,  “Can I keep the rabbit’s foot for good luck?”   He cut off the rabbit’s foot and put it in a plastic bag and we put it in my hunting pack. Then we headed back to hunting.

We eventually spotted eight elk grazing on a huge butte on public land about two miles away.  I asked Kelly if it was worth it to go after these elk.  He responded, “You can’t win if you don’t play!”

We decided to head after the elk. I don’t think anyone of us really thought we had a chance.  After walking about 300 yards out into the field, five horses came and started running all around us.  We thought our hunt was over because the horses were making so much noise but miraculously it didn’t scare the elk. After the horses left, we kept walking toward the base of the hill when all of a sudden two cow elk popped right over the top of the hill.  We all dropped to our knees just waiting for the rest of the herd to pop over, but they never did.  The two cows just kept walking and walking until they walked right past us.  We then had to belly crawl over 800 yards across the sagebrush prairie.  The mosquitoes were terrible, the cactus seemed to keep finding my hands, and my knees were killing me.  With each crawling motion I kept worrying about rattlesnakes.  After we made it across the open prairie by army crawling, we were hidden behind the hill and we started walking again to the base of the butte.  It was getting dark so the walk was rapidly turning into a jog and then into a run.

Right as we made it to the top of a huge butte, we peaked over the hill and saw about 20 cows and a few bulls 100 yards away. We decided to walk up the other side of the hill and around to try to get up behind the elk.  We started walking up the side of the hill when all of a sudden Kelly slowly stopped walking, sat down, turned around and said, “There’s a bull. Get an arrow.”  There were more elk than we originally saw. I grabbed an arrow and knocked it.  I slowly scooted forward on my knees, drew back and focused my sights on the bull who was 45 yards away.  I took a deep breath and released.  It was just like I had practiced hours before with the guys at camp, from my knees, at 45 yards.  The arrow flew smoothly through the air with nothing in its path. As it struck the bull elk, he turned and ran.

I turned around and looked at Kelly and whispered, “How big was it?”

Needless to say, I was shaking so bad it was unbelievable.  I never looked at the antlers before I shot; I just knew it was a bull.

Then the waiting started. We sat on top of the butte and we watched the sun set.  The black night set in and the sky started to dance. The northern lights were going at full throttle; the sky was ablaze with screaming color.  The coyotes were howling.  Never having experienced this before, I soon realized why they call Montana the “Big Sky State.” It seemed like nature was almost cheering me on.  I layed back on my back with my dad and Kelly and just enjoyed the beauty that was in front of us.

After waiting an hour, we popped over the hill and we saw the majestic elk.  His huge antlers showed over the sage brush.  I immediately dropped all my stuff and ran down and jumped on top of him, my elk!  I cannot describe the feelings that flooded over me.   After the three of us made it down to the elk, the reality of it all set in.   I had just experienced a hunt of a lifetime.

We made it back to camp at 2:30 am.  I had been up for almost 24 hours.  I had hiked 10 miles.  I had cut my tag for a 6 x 6, 350+ bull elk.  And guess what?  All the lights were on at camp.  The guys came out and gave me high fives and were dying to hear my story.   Those strangers we had breakfast with on that first day, waited up for me.  Marty, Taylor, Scotty, Justin, Gene, Bob, Mark “The Captain” and Kelly…Thanks.  And a special thanks to the guys at Extreme Performance Archery in Bozeman for setting me up.

And the lucky rabbit’s foot………it will be in my pack for every hunt until the day I die! 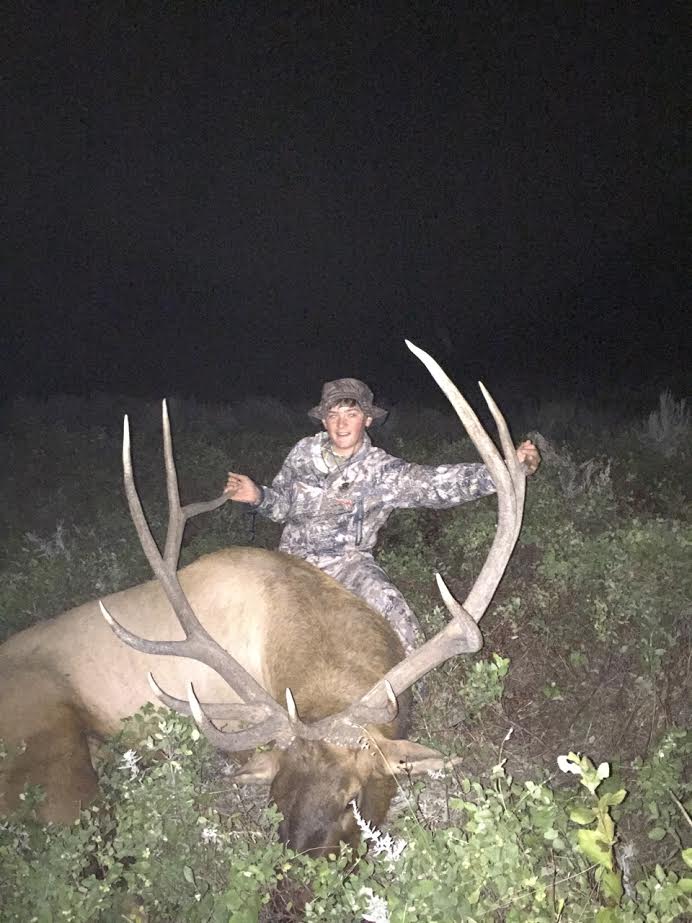 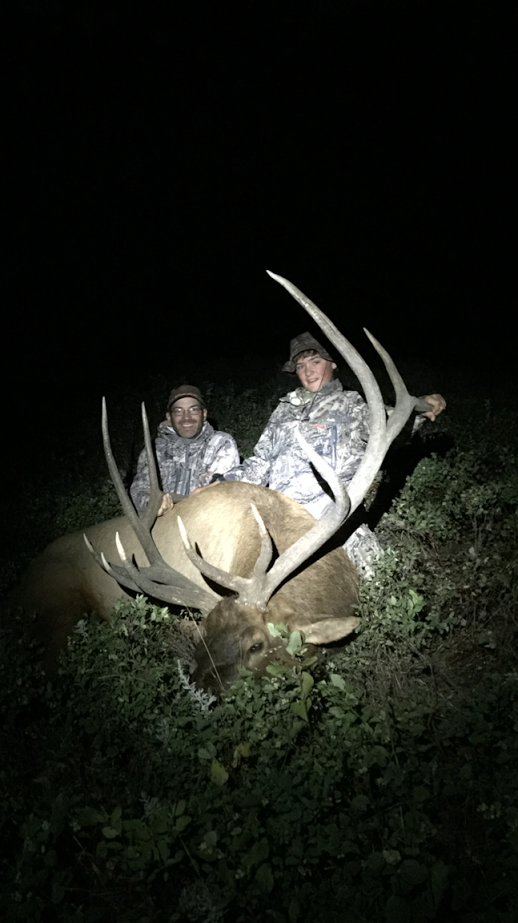 Kelly Burke and Zach with his bull 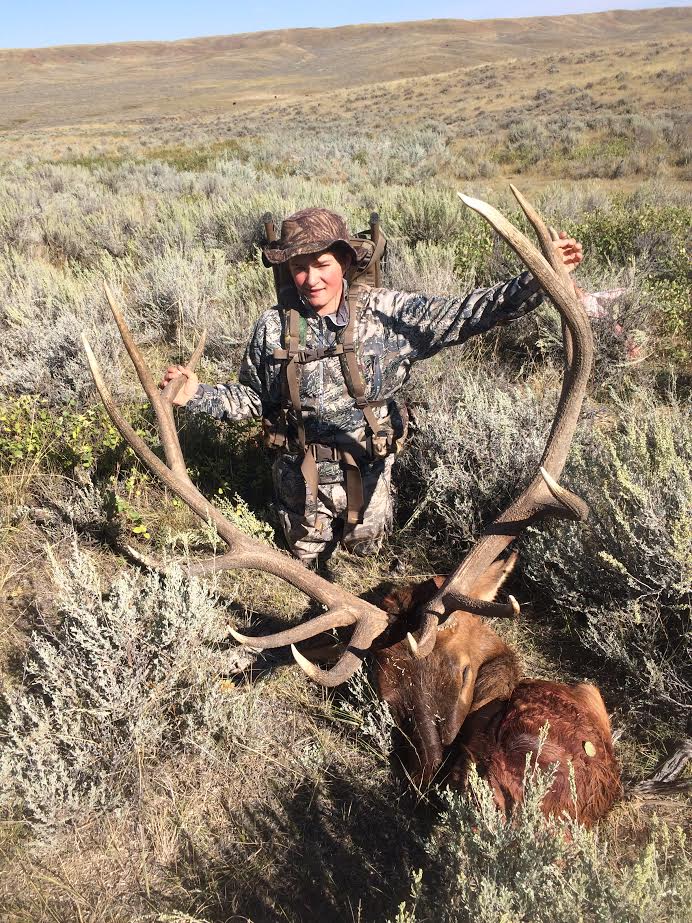 Zach with his bull 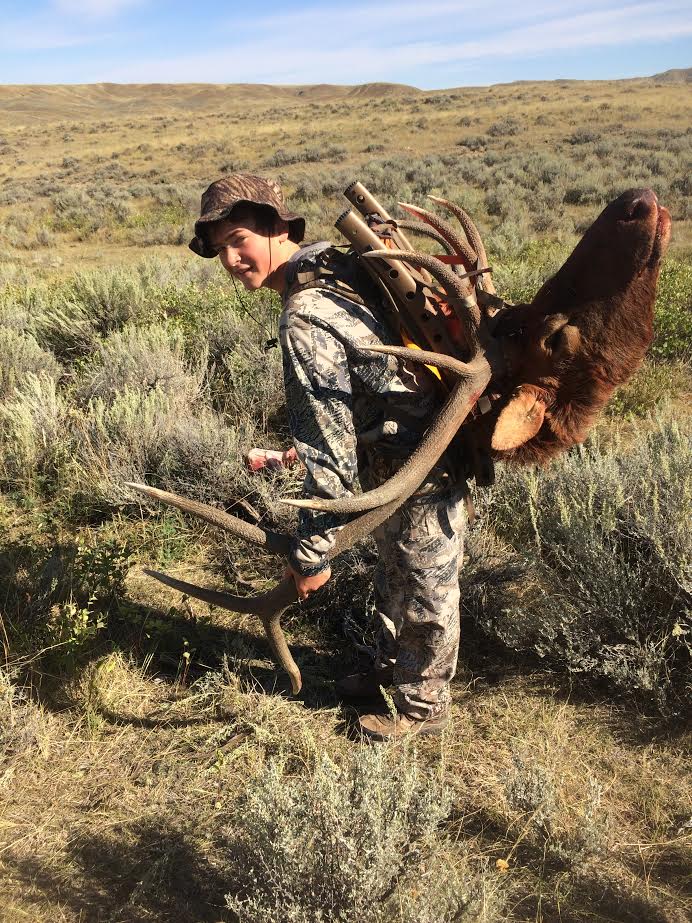 Zach packing out his bull 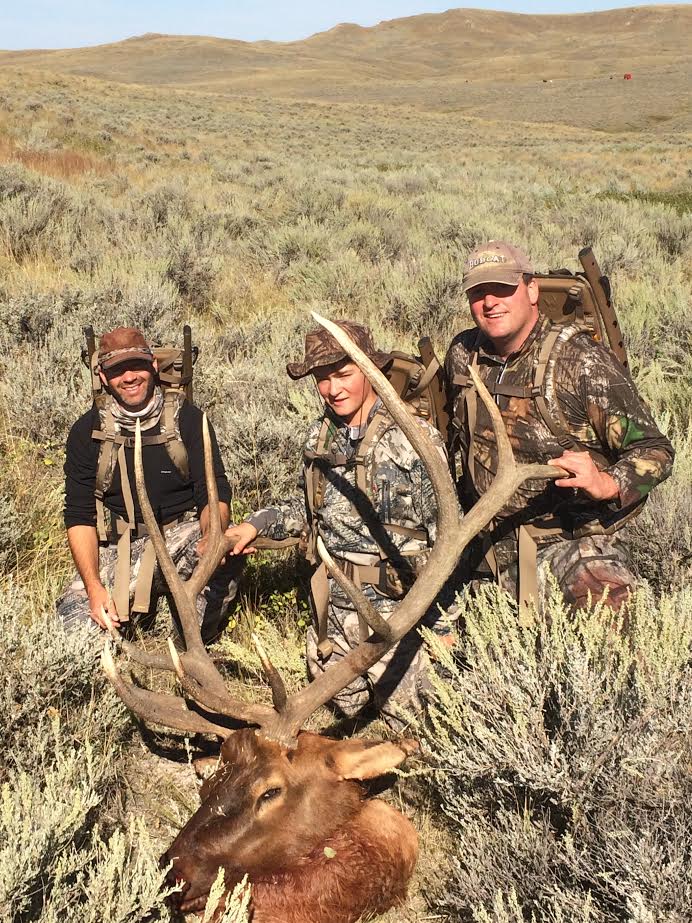