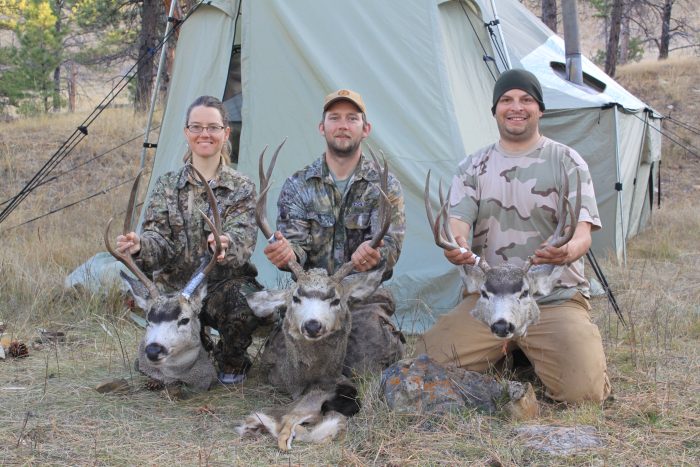 Deer harvest in northwest Montana is slightly ahead of last year at the same point in the season, according to check station results around Region One.
At the six northwest Montana check stations through Sunday, November 20, a total of 14,192 hunters checked 1,141 white-tailed deer (813 of these were bucks) as compared to 953 whitetails last year.  Also in the count were 129 mule deer, and 64 elk for an overall 9.4 percent rate of hunters with game.  Harvest was up slightly as compared to last year when 7.5 percent of hunters checked game.  Hunter numbers are down six percent as compared to last year.
“Overall success rates continue to be above 2015 levels,” says Wildlife Program Manager Neil Anderson. “We are seeing a higher percentage of 3-year old and older bucks at check stations now, which is expected with the onset of the rut.”
Anderson noted that elk hunting continues to be a challenge.  Hunters are reporting seeing cows and spikes, but legal bulls have been hard to come by.   The lack of snow makes elk hunting difficult and allows bulls to stay at higher elevations and in thicker cover.
Hunters are reminded that it will be legal to harvest antlerless white-tailed deer on private property during the last week of the season with a general deer license.  This does not include corporate timber lands.  The goal is to allow hunters to harvest a doe, rather than a small buck, and help reduce deer numbers on private land.  On public land, it is buck-only for whitetails.  Antlerless whitetails remain legal game for properly licensed youth 10-15 years of age, and hunters permitted to hunt from a vehicle.  Mule deer are buck-only for the entire season.  Elk are brow-tine bull only and spike bull elk are not legal game for any hunter in Region One.  Hunters should refer to the hunting regulations for the hunting district they plan to hunt.
The general big game season ends one half hour after sunset on Sunday November 27.