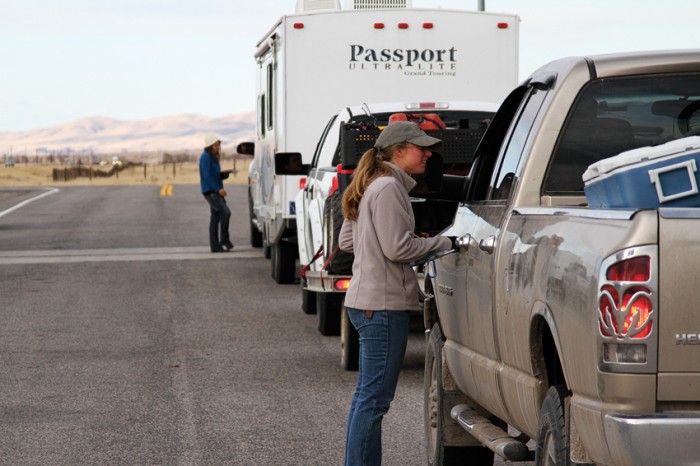 BILLINGS — Warm temperatures and light wind over the weekend made big-game hunting in south central Montana difficult. Hunters were able to access areas well above 9,000 feet in the Beartooth Mountains without finding significant snow accumulations. But the lack of winter weather made finding and tracking game a challenge.

As a result, the number of hunters who stopped at Fish, Wildlife and Parks check stations over the weekend was lower than the same weekend last year. The harvest of all species generally was off as well.

The number of hunters who stopped at FWP’s Laurel check station was down from the same weekend last year, but those who stopped were more likely to have a harvested animal.

FWP wildlife research specialist Jay Watson checked 137 hunters over the weekend, down from 152 in 2015 and still well below the long-term average.. The white-tailed deer harvest was identical to last year at 21 animals while the mile deer harvest was 37, up five from a year ago.

Of those who stopped at Laurel, 42 percent had harvested game, up from 38 percent during the third full weekend of the 2015 general big game season. Antler growth and body fat on the deer checked at Laurel indicate that the animals are in very good condition going into the winter, Watson said.

Hunting and harvest were off by all measures taken at FWP’s Columbus check station over the weekend. FWP wildlife biologist Shawn Stewart checked 175 hunters, down from 199 a year ago. Those hunters checked 10 white-tailed deer – less than a third of last year’s third-weekend harvest – and 30 mule deer – down two from 2015. Just 27 percent of hunters who stopped at Columbus had harvested animals, down 10 percentage points from a year.

At FWP’s Lavina check station, hunter numbers were well below the same weekend last year, but 24 percent of hunters had harvested game, identical to 2015. FWP wildlife biologist Ashley Taylor checked 209 hunters, down sharply from 290 during the third weekend of the 2015 season. Hunters had 10 white-tailed deer, up one from a year ago, and 28 mule deer, down from 35 in 2015. The elk harvest was down substantially, from 22 a year ago to just nine this year.

For the 2016 big-game season year-to-date, the deer harvest is well below the historic average, though it has increased from recent years. The elk harvest remains 42 percent above the long-term average with 34 bulls and 17 antlerless elk checked to date.

Several bucks checked at Lavina displayed evidence of rutting and rutting activity in several areas appears to be increasing this week, Taylor said.

The number of hunters who stopped at FWP’s Big Timber check station over the weekend was the lowest in four years, but those who hunted harvested more game than any year since 2011.

FWP wildlife biologist Justin Paugh checked 113 hunters, down from 134 during the third weekend of the 2015 season. Of those who stopped, 45 percent had harvested game, up from 39 percent last year. The deer harvest was strong with hunters checking 13 white-tailed deer, up from eight in 2015, and 27 mule deer, up from 12 last year. The elk harvest continues to lag with only four checked over the weekend, down from 27 in 2015 and the lowest for the weekend since 2010.

For the entire season so far, hunter numbers are slightly above the long-term average and similar to the past few years. For the 2016 season so far, 40 percent of hunters have harvested game, statistically the same as the average of 41 percent.