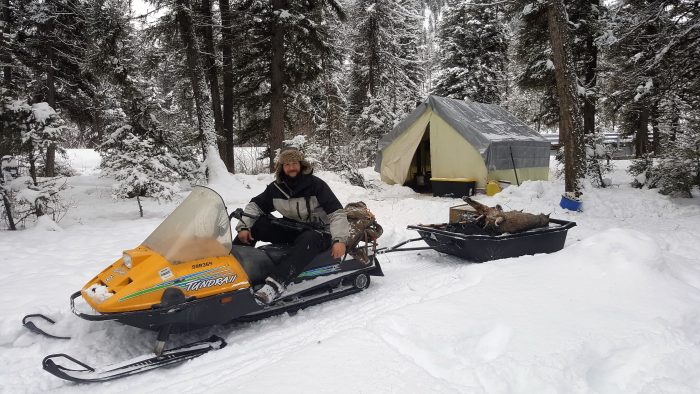 Every hunter with an adventurous spirit has dreamed of setting up a wall tent with a group of capable friends to pursue wild game. I’ve always wanted to spend the winter in the woods and it started out better than expected.

A fellow houndsman and friend Joe McGillivray asked me if I’d like to go on an adventure with dogs, traps and guns.  I don’t know of any other answer to give except absolutely!  The question came right around new years day here in Montana.

We picked a location that would allow us to run our hounds, and traps from a remote wall tent.  The tent will save us two hours of driving every day which adds up over the season.

On the first morning Joe saw a bobcat standing in the road.  What are the odds?  Well, there it was and he turned his hounds loose about thirty minutes later.  I planned to be there later that first morning but got a call from Joe at 8:30 am that he had already treed a bobcat and we didn’t even have camp set up yet!

The next day we met up just after sun up to see what we had found for tracks in the dark. Joe had found a female lion track, wolf tracks and one bobcat track that seemed to be glued onto wolf tracks in the deep snow.  I followed them out to see where and when the bobcat was on his own.  Neither of us wanted to send hounds out on top of wolf tracks.

The bobcat tracks headed down for a hundred yards or so and then up on a log that took it easily over the deep snow and into a blow down.  I already knew the track was fresh but dirt on top of the snow suddenly burst into a ball of fur.  “Dump the hounds!” I yelled as loud as I could with the bobcat leaping in front of me and heading towards Joe and our hounds.

My young pup worked that track and put the bobcat right in the road next to Joe.  Some time later it was up a tree and for the second day in a row, Joe saw the bobcat before it was treed with hounds.  Joe has turned hounds out on bobcat tracks that ended in nothing more than a day on the mountain more times than he cares to remember.  But then again he’s never been to cat camp before! 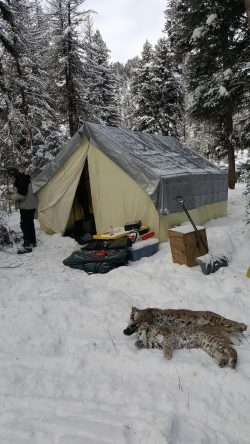 Deer camps are set up everywhere in the country and elk camps in the west.  We’ve even got fish camp, bear camp and when things go right we’ve got moose camp, sheep and goat camp.  But how many have ever been to cat camp?  It might just be the best camp of all.