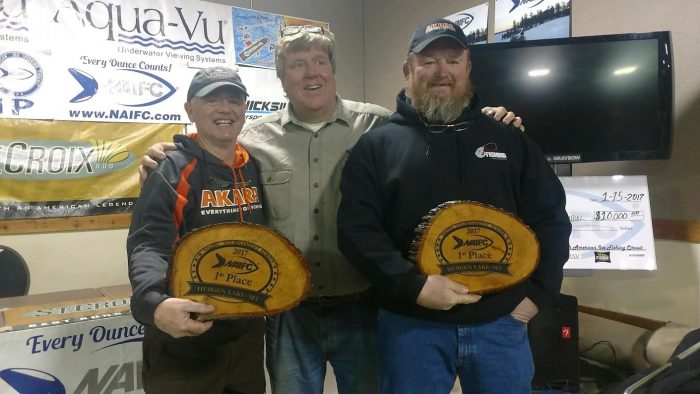 The results are in and a couple of Montana Boys took home the cash during the NAIFC qualifying event held Sunday!

This year as an added bonus, the folks at West Yellowstone stepped up and guaranteed $10,000 cash to the first place team. 71 teams entered this year and the competition was close. The two person teams fished from 8am to 1pm last Sunday on Hebgen Lake. The conditions were tough as ice anglers had to endure knee deep slush wherever they went on the lake. In the end a team from Northwest Montana came out on top by one-one hundredth of an ounce. Mike Howe from Kalispell and Jason Mundel from Coram captured first place and $10,000 while weighing 6 trout at 14.44 pounds. They edged out another Montana team of Stephanie Houston and Scott Clark who also weighed in 6 fish but came up short at 14.43 pounds. A team from Wisconsin took third with just over 14 pounds. “The conditions were brutal”, said Howe by phone on his way back on Monday, “We pre-fished for 3 days and every morning we went out it was 25 below”. Howe said that they caught fish everywhere they fished while they were pre fishing but on Saturday the day before the tournament they fished in one of Howe’s favorite spots on the lake and they didn’t find any fish. “So on tournament day we decided to take a gamble and fish that spot anyway”, he said. Howe who has fished the tournament for three years explained to me that he has always caught fish there and it is hard to get to if you don’t have a snowmobile because of the slush. “It is definitely the worse place in the lake to ice fish so every year we are the only ones fishing it but we always catch fish, in fact this year the closest team was about a quarter mile away from us”, said Howe. Last year Howe and his wife Cindy fished the tournament and actually had enough weight to place in the top 10 but they didn’t make it in to the weigh in on time because they got stuck coming in. “You live and learn so this year Jason and I made sure we could get in and out of there as we made tracks the day before with our snowmobiles”. Howe and his wife Cindy did take 2nd place in 2013.