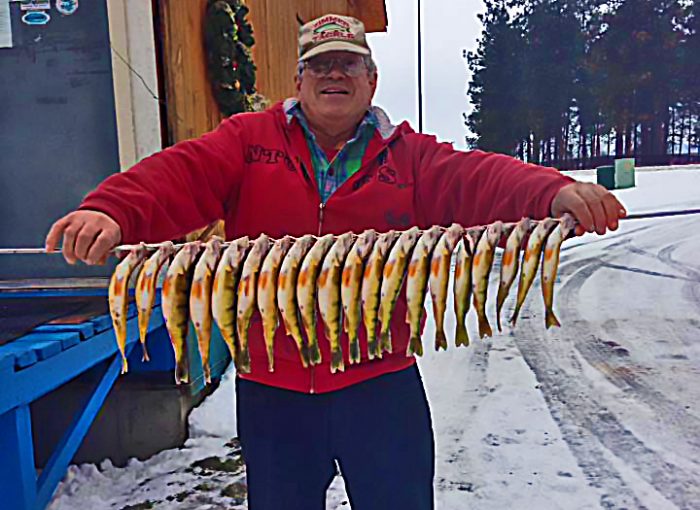 The Macman Fishing Report 1.30.17
By angelamontana

My gifted cohort, Marlon Starblanket, wrote a good dissertation of the thought intricacies that a successful ice fisherman on East Bay goes through. (See below)

There are very few places where fishing has an aquarium quality as it does in that shallow bay.

We were fishing with a combination of a double treble ¼ oz. Trilobite or a tube jig below one of our new drop shot (inline) setups. Maggots for bait to catch your first few perch and from then on perch eyes are a great bait. They only poorly responded to night crawler.

Anywhere east of Ducharme access where you find weed beds from 2 ½ to 5 ½ feet of water you’ll find fish.

Because the perch are massing for the spring spawn there should be a steady improvement in the fishing until the ice is no longer safe.

There has been a problem with people cutting large holes in the ice in front of Polson which poses a real danger as well as being illegal.  Anything more than 144 square inches (12”X12”) is unlawful.

For lake trout ice fishing Elmo and Big Arm bays are your best bet. A 40 to a 50 foot depth is magical. Large tube jigs with cut bait give the best production.

Lake Mary Ronan had some great Kokanee and perch fishing a week ago but that has slowed some.  Best fishing was from 10:00 a.m. to 1:00 p.m.  The fish preferred maggots.

Because of extreme ice and snow cover on the local shallow bodies of water, oxygen depletion make the fish very sluggish so your chances of having a good day on them is slim to none.

For more information give us a call at 406-675-0068 or email us at macman@ronan.net for our product line check out our website at:  www.zimmertackle.com

The weather was near perfect at East Bay of the Ducharme access turnoff.  The snow was glistening, fishermen setting up and the fish were waiting.

After about a mile trek with the ice shed we came across two lads who were more than kind enough to inform us what they were catching.  How often they caught them and what they were using for bait.  With the information obtained the macman and I were able to pick out a spot on the ice where the perch could possibly be hiding.

For about ten minutes there was absolutely nothing; no bite, but out of nowhere a massive bite came and my hooks were swarmed by the hungry perch.  Just as fast as the bite came in it left in the same speed.  The ten minute pattern repeated itself four or five times before I decided to move.

Assuming the perch were coming at the bait from the south and east I headed toward that direction about fifty yards past the Macman and his ice shed.  Sure enough, once I put my hooks in the two feet of water they once again instantly covered with great perch.

But just as fast as they bit they left once again.  After moving once or twice with the Macman in his shed, we stayed for about two hours to see what would happen.  After one spot absolutely covered with weed beds we came to the conclusion about the elusive perch; they have been messing with us.

All of the perch attacked the hooks from the south and the east.  When we moved they seemed to be less frequent.  We decided to move the ice shed this time to the northwest up about sixty yards before we leave the area.  Little did we know that everyone else had left the ice a long time ago.

Ten minutes passed and no bite for either one of us.  With the sun going down and our toes almost frozen solid macman says, “Well, where should we go?” Just as I was about to answer him I saw the macman bend over his ice hole and jerk his fishing pole up.  He caught a nice sized perch.

About a half hour goes by and finally the bite stops.  We pack up and begin to head out.  I heard the macman say, “We are the last ones out, that’s happened to me so many times out here.” As we reach the car with five gallon buckets, each half full, containing 95 perch all ranging from 9-12 inches long.  Safe to say, “Today was a good day”!