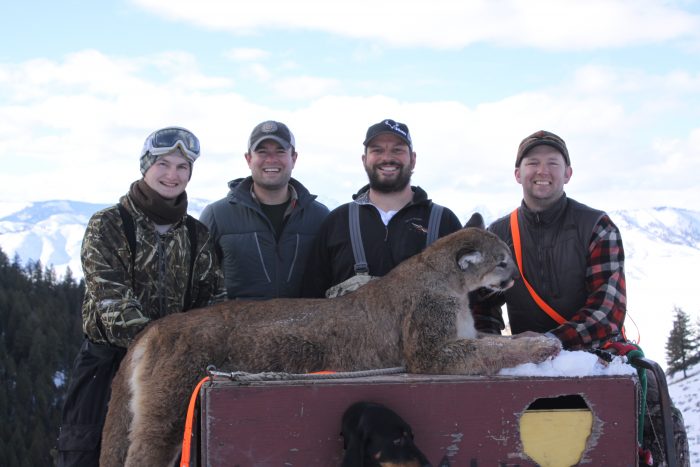 I stepped through the canvas flaps of the wall tent long before the sun would trade places with the moon and smiled at the thin layer of fresh snow on the ground.  It was as if mother nature knew that our friend Scott had just two and a half days to find mountain lion before his plane would carry him back home.   The weather had warmed for a couple days allowing the snow to settle for the first time all winter.  Then in an act of defiance against the weather reports the temperatures cooled and snow fell.

Two hours later Wyatt Doyle zipped into camp with a snowmobile and a photo of a fresh lion track.  Scott was happy to hunt for any lion and with limited time his expectations were a lot lower than mine.  But he had no experience hunting lions yet and would be happy to watch the hounds work and maybe see a lion in a tree. 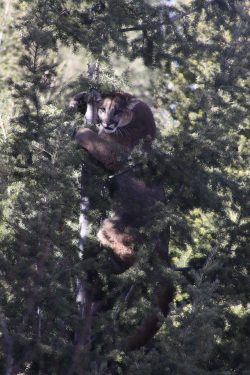 A ride to the top of a high mountain pass would take some time with a snowmobile pulling four hounds and Wyatt.  And like so many days spent pursuing lions plans changed in a millisecond.  That’s about how long it took us to realize that the lion track in the snow was big.  Really big.  Fifteen minutes after that our hounds were barking with pierced eyes looking up.  Two minutes later three hounds were heading to another lion tree. 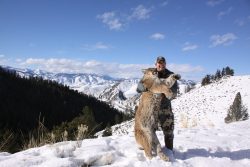 A shot was fired.  A big tom was tagged.  That’s a big deal for the hunter, the houndsmen and their hounds. But then another amazing thing happened when standing high above a steep canyon two pups chased a lion in full view of the houndsmen.  The cat went up the tree and for the first time Action and Flora treed a lion on their own.  Those two pups are mine and I was proud of them.  We took photos and headed back to camp feeling tired, hungry and happy. 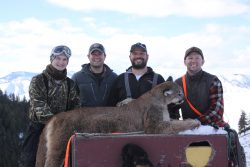 It’s days like this when appreciative hunters who just love hunting for what it is and, what it sometimes isn’t, that drives hunters to excel and to want more days like this.  They are few and that’s what makes them special.