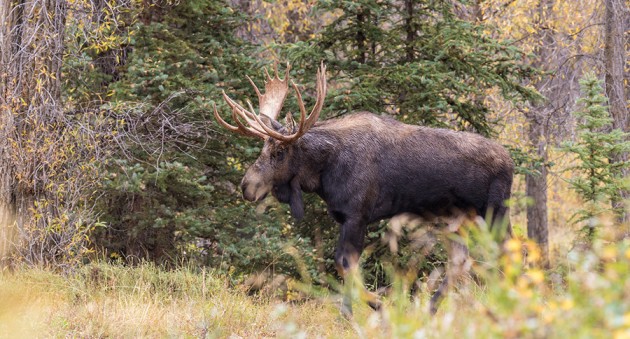 Moose Hunters to have Montana Shiras Opportunity!
By angelamontana

HELENA, Mont. Jan. 23, 2017 – Big game hunters will soon get a chance at a rare trophy. On March 3, 2017, the Helena Ducks Unlimited Chapter will be auctioning off a Montana Shiras moose license at its yearly dinner.

“We will have an exciting auction this year,” said Steve Christian, an organizer of the event. “We hope it will draw folks to the Helena banquet, which is always a fun event.”

Participants may also bid over the phone. Watch for information on how to register at www.ducks.org/montana.

DU is conducting the auction on behalf of Montana Fish, Wildlife and Parks (MFWP). Proceeds from the auction go to benefit MFWP habitat programs. In addition, organizations handling the auctions get to keep 10 percent of the proceeds for administrative costs.

Past moose licenses sold at auction for $15,000 to $24,000 before DU took over in 2014. Since then, the average price has risen to $45,000. MFWP has offered the statewide moose license auction to non-profit conservation organizations since 1997. The license is good anywhere in the state where moose can legally be hunted for the 2017 season, as described in the 2017 Montana hunting regulations.

Ducks Unlimited has been conserving waterfowl habitat in Montana since 1984 with much of that habitat also benefiting the Shiras moose. There is no better example of prime moose habitat than the pristine wetland and river complexes in Montana from the Rocky Mountains to the prairies. These areas are used by many important wildlife species, including moose as they move from their summer ranges to their wintering habitat.

DU strongly supports public access, especially through its work with Montana and federal fish and wildlife agencies to restore and protect habitat that will enhance public hunting by attracting more wildlife. We respect and support these agencies’ position on outdoor recreation and wildlife management in Montana. The protection and enhancement of our shared waterfowling heritage is a core value of our organization.

Ducks Unlimited Inc. is the world‘s largest nonprofit organization dedicated to conserving North America’s continually disappearing waterfowl habitats. Established in 1937, Ducks Unlimited has conserved more than 13.8 million acres thanks to contributions from more than a million supporters across the continent. Guided by science and dedicated to program efficiency, DU works toward the vision of wetlands sufficient to fill the skies with waterfowl today, tomorrow and forever. For more information on our work, visit www.ducks.org.