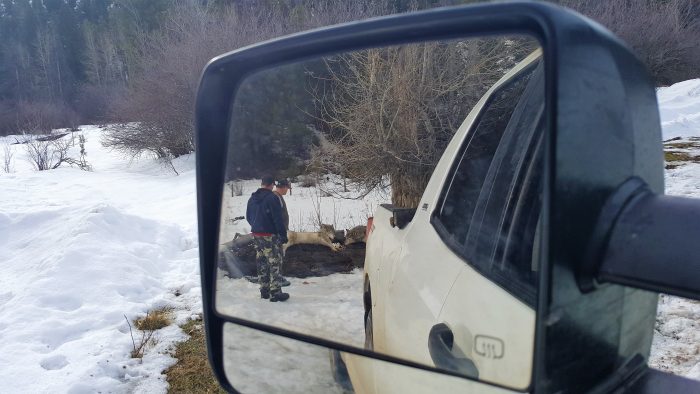 I’ve failed a lot more than I have succeeded as a wolf trapper.

If I count the number of trap nights that resulted in gallons per mile calculations and trap-line equipment costs versus number of wolves trapped, the ratio is a bit off.  So far off that anyone with half a brain would have thrown in the towel a long time ago.

Fortunately, digging holes in dirt, snowshoeing, snowmobiling and chaining up truck tires all winter is kind of fun for me.  So is tracking wolves in the snow and learning about wildlife.  One thing I learned is that it sucks to beat the crap out of snowmobiles, and pick up trucks all winter.  Looking back – I wish I would have focused more on easier set locations than exploring ways to “get in to the wolves”.

At one point I spoke these words: “The only way to trap wolves now is to make a big bait pile and cover it like a lion kill and set traps on trails going in and out of the bait”.  This came after a season where wolves avoided every gland based lure I used and other trappers I knew had success with simulating lion kills.  If you read any Alaskan wolf trapping info this trapping techinique is front and center.   Big bait stations are hard work and don’t work as well as other methods – not even close. Looking back – making big bait piles for wolves was a huge mistake and I will never speak these words again. 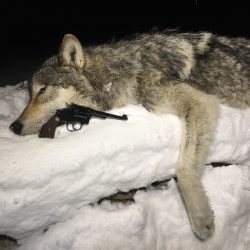 My first year of wolf trapping I spent more time digging traps out of the snow and chipping ice off traps than I did skinning wolves – and that is a major understatement.   I didn’t know about waxed dirt back then and I never gave much thought about getting my traps under big trees to keep snow and rain off.  Looking back – I still have nightmares about re-setting every trap on my line on every check and wondering if the madness will ever end, which it did, but not without a total overhaul in my trapping philosophy.

My most recent year of wolf trapping came with many blessings.  A friend of mine named Brian couldn’t trap in his usual areas because of a surgery that left him with some much needed recovery time.  He helped get me on to a ranch to trap and another friend named Jerry introduced me to the ranch owner.  Brian left a snowmobile there for me to use and Jerry helped me on the trap line.  How can a trapper ever say thank you enough?  Well, I probably can’t, but I’ll try.

Brian and Jerry – thank you.  This new location also helped me to understand wolf behavior and it helped me to see the value in good set locations.  So many times I have set traps that stretched my time so thin I couldn’t keep up.  This season I have been able to focus on a relatively small area.  I spent a lot more time making sure every set (8 total) was perfectly constructed rather than having 25 traps that were just ok.  Looking back – I wish I had set fewer traps in better locations over the years.

I have failed a lot at this, but after all the failures I think it has made me a better trapper.  The people I have met and the experiences I have shared while failing so many times will last a lifetime.  My true success seems to be more related to the great people I keep meeting along the way.  Hopefully, someday I’ll be sitting in a rocking chair Looking back – and when I do I hope that I’ll appreciate all the times I failed just as much as all the times I succeeded.