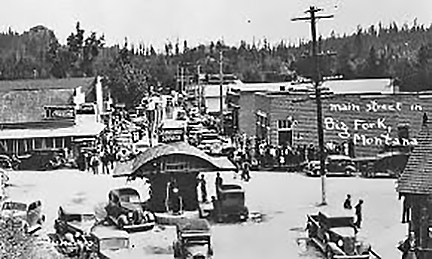 Montana History: The Beginning of Bigfork
By angelamontana

Learning about the history of Montana is awesome to many who live here and to some who don’t.  Here is some history from the Bigfork, MT Odds and Ends blog on the town of Bigfork that is interesting. 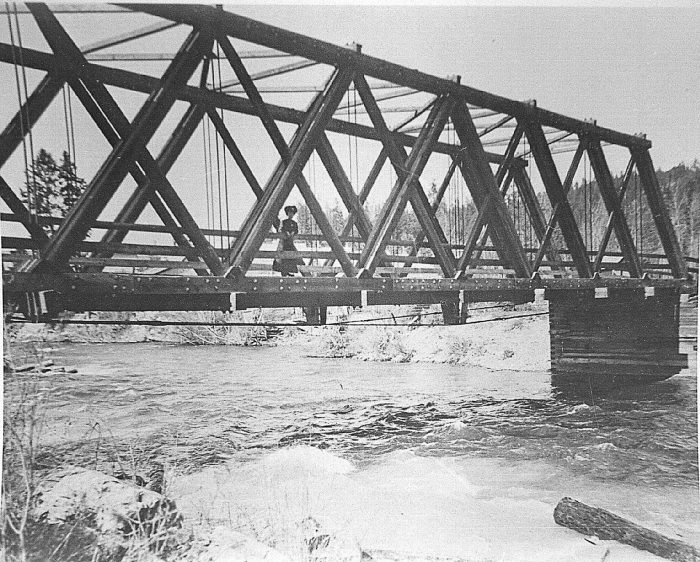 the downtown Bigfork Bridge in the 1900s

In 1887 the Dawes Act divided rich bottomlands of the Reservations into individual allotments, and the land left over was considered surplus to be settled by non-natives. Everit L. Sliter was one of these who wished to take on new adventures and opportunities. So he arrived in 1889 while on a fishing and hunting trip, and decided to move to Bigfork.

Everit was one of the successful young men of early Montana who grasped opportunity with both hands. He was born in Vicksburg, Michigan, on November 29, 1866, the son of Andrew J. and Lucy (Moffett) Sliter.

After graduation from high school in Vicksburg, at the aged of nineteen, Everit L. Sliter went to Blue Hills, Nebraska alone.

The enterprising Everit then journeyed to Ouray, Arapahoe county, Colorado, where he bought horses and a 160 acre farm for $300, part of this $300 was to be paid in labor. In six months he lost his horses through overwork, left the farm and went to Fremont, Nebraska, and was a clerk in a hotel for eighteen months. With $300 saved working as a hotel clerk, Everit took the old buffalo trail to Helena, Montana, for forty-four days traveled on that trail, Everit was lost five days in a snow storm in the Bad Lands. He was fortunate enough to kill a range steer for food otherwise he would have died for lack of food.

He promptly returned to Helena and closed out his business to permanently settle on his Flathead lake land.  Everit was also involved with the building of railroad depots between Helena and Butte in the early days on the Montana Central Railroad line. But he quit is his job in the winter of 1888. He kept a peanut and popcorn stand on the corner of Broadway and Main Streets in Helena.

In the Spring of 1899 he opened the Palace cigar store in Helena, taking on a partner, George D. Crie. It’s obvious Everit was a hard worker, but like all hard workers he needed a bit of a break. So on March 8, 1889, Everit came into the Flathead Valley on a hunting and fishing trip.

He was so pleased with the valley and its possibilities that he purchased a Bigfork ranch, consisting of 139.6 acres, from William Ramsdell, for $1,380. The only improvements on the ranch was six acres under cultivation, a dirt-roofed house and a little log stable.

During the first winter of his life in Bigfork he killed twenty-six deer to survive. Everit kept ‘bachelor’s hall’ for four years and clerked for three years of that time for Mr. Ramsdell at his store in Egan, Montana.

In the spring of 1892 Everit L. Sliter opened the first store at Holt (Bigfork), but soon sold the store and made a trip to his original Michigan home.  On December 14, 1892, Everit married, Lizzie G. Osborn, daughter of Henry D. and Maria (Turber) Osborn.

In 1892 Everit L. Sliter also made the first start in what promised to be one of the largest and productive orchards of the valley by setting out 500 apple, cherry, plum and pear trees. The next year 300 more trees were added and in 1894, 700 more trees. He had 4,000 fruit trees, of which 1,500 were actively bearing fruit.

From that time on the Sliters labored zealously to build and develop a handsome estate at Bigfork, Montana.  The estate numbered 555 acres of fertile land located at the head of Flathead Lake. Their fine home, was a hotel, with fifteen sleeping rooms, built in the spring of 1900.  At this hotel a traveler could find entertainment surpassing many big city hotels.

In 1901 he platted the town of Bigfork (100 lots) and secured the establishment of the Bigfork post office. Everit was commissioned as Bigfork’s first postmaster, he soon resigned the office in favor of O. A. Colby.

At that time, Bigfork was nothing more that “cut over land” so at Everit’s own expense he procured a stump-pulling machine and removed all the stumps from the streets and main building lots, leaving the ground clear and free from obstructions. He used almost all of this money from the sale of his Bigfork lots to make improvements within the platted area of Bigfork, Montana.

It was at this time,(1901) that the hydroelectric plant was built at the mouth of the Swan River to supply energy to Kalispell, Montana.

Today Bigfork is the 25th most populated city in the state of Montana out of 362 cities, with 4,621 people.

(Feature photo via The Old Motor.com)