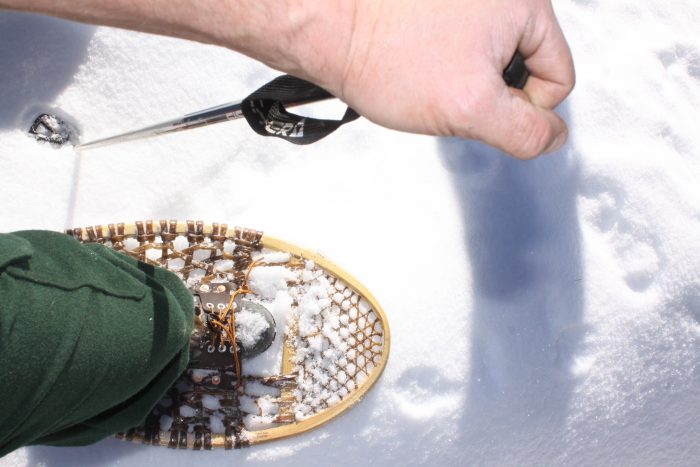 I’ve had foot hold traps set for wolves on a routine travel route where an  entire pack would stomp all over my traps and work every set before moving on.

The problem was that with 12 inches of snow there was no way my traps would snap. I’d dig them out in frustration and get everything all set up again and hope it didn’t snow before they came through the next time. But then it would rain and freeze, thaw and snow again. Sound familiar?

If you trap in the north it is going to snow and the weather is going to throw you curveballs. But if you’re digging out traps and remaking frozen sets every time you check you’ve got to ask yourself just how effective are the sets you’ve made? I asked myself that several years ago after five 72 hour trap checks in a row nearly every trap on one section of trap line had to be remade because of snow, rain and freezing temperatures. The snow would come, temps would rise and a thick crust of half frozen snow had to be chipped off my traps. I eventually gave up and pulled every foothold trap I had and just left snares out which limited my overall effectiveness.

I have enjoyed two-week-long deep freezes where my traps kept working and the snow didn’t pile up. I can only imagine what it must be like to enjoy that all winter! Usually any given week will provide opportunities to shovel heavy wet snow off traps or chisel ice off or both. So what is the answer?

It has taken a bit of time to find travel routes of animals like fox for example, where there is only two or three inches of snow amidst snow up to my knees. Thick evergreens catch the majority of snow creating nearly bare ground conditions in mid winter. These types of locations are tough to locate but when you find them it is as good as gold.

But it isn’t necessarily just thick overhanging trees. I’ve got a set location that is good for several fox each season that follows an old tote road. I’ll be trudging along the road in snow over my knees and just five feet off the road edge is a small group of trees that for whatever reason keeps the snow at bay. It is here that I rub a food/gland lure and squirt a little urine on a tree trunk and bed a trap.  If it snows six inches I’ll find just a skiff of snow on the trap. Why? I don’t really know, but four years in a row I’ve caught late winter fox at this location when other locations are buried beyond use. 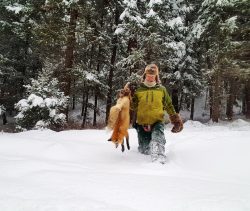 Some of the best locations are underneath blow downs. If you find a place where animals are walking under a blow down where the snow is shallow or bare ground is exposed this can be a top producing set location that won’t require any bait or lure. These locations can be enhanced by adding evergreen boughs on top of the fallen tree to weather proof it even further. But be careful not to over-do it. Any additions should be subtle.

Deep snow trapping is going to reduce the number of traps you use simply because locations that will work are not going to be anywhere near as plentiful as they are in warmer conditions. But fewer traps set where they don’t require constant maintenance will produce more fur and save you time because you won’t be remaking sets on every check.

If you need anything more than a brush to clean your traps off two or more times in a row, find a new location where you don’t. That way you can spend more time skinning and fleshing and less time shoveling and complaining.