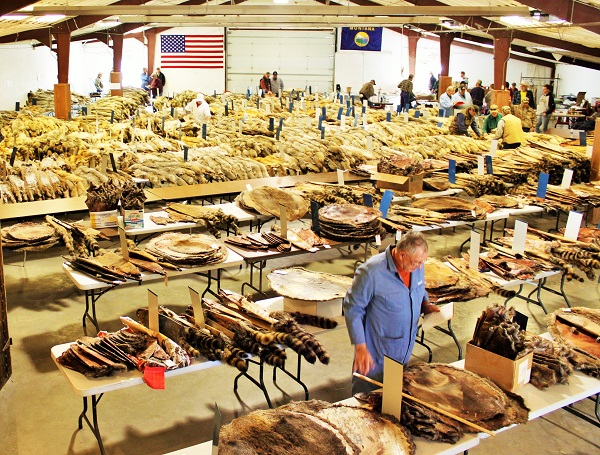 The Fur Trade – What You Didn’t Know
By Toby Trigger

A coyote that worked its way down the draw to a glob of gland lure I smeared over a bush yesterday stepped squarely between the jaws of a number 3 coil-spring trap.  The accomplishment of convincing this cunning animal to step on a trap pan just two inches in diameter is photo worthy, especially since it could have stepped anywhere among the millions of acres of surrounding national forest.

The bulk of wild furs feeding the global market are produced by small time trappers like me who enjoy the challenge of trapping and hunting a few weeks each fall.   I’ll add this coyote to the dozen or two other furs I’ve hunted and trapped this season and dry the pelt on a forming board in my garage.  This pelt will be sold to a buyer who knows a manufacturer with a contract to make garments and eventually the pelt from this coyote will support the international retail fur trade that exceeds $14 Billion annually.

Local fur buyers are known as country buyers in trapper lingo like John Hughes of Roundup, Montana who has developed world wide outlets for wild furs over three decades.  Hughes prefers that local fur takers bring skins directly to his 40’ x 98’ building called “The Fur Shed”.  Hughes looks over pelts and makes an offer on the spot.   His orders for furs may come from faraway places like a manufacturer in Italy, a fur broker in China or far more domestic places. “There are all kinds of outlets for furs out there.  Maybe the best outlet is right in your home town but it’s on a smaller volume, like a local gal who wants five or six red fox and she’s willing to pay $75 or $80 for them because she’s going to make a few hats or that sort of thing.” Hughes says.   “Maybe it’s not a big order but if you get a lot of them it turns into something big.”

Hughes has diversified his fur-buying business over the past three decades buying un-skinned coyotes “in the round”.  This means that Hughes or one of his employees must spend hours removing hides from carcasses and even more hours scraping fat and flesh before washing and pulling skins over forming boards to dry.  The skins will be sold and the glands will be used to create J&M’s signature gland lures for trappers who’ll use them to bring in more furs next year. 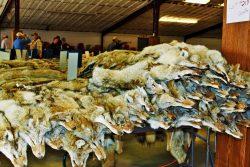 Coyote pelts dominate the Montana Trappers Association’s annual fur sale but other articles like raccoon skins, beaver castor, and marten are piled high on rows of tables.  Each trapper brings the fruits of season-long labor to the check-in table where every item is tagged by hand and made ready for five or ten fur buyers to inspect.  This scene is like dozens of state fur auctions held annually across the country.

Hughes must travel to these sales each year in order to achieve the volume his financial intermediaries expect.  Hughes inspects each lot while another man writes down information in a notebook.  Other buyers are doing the same and Hughes knows who his competition is.  “Of the five to ten buyers at each sale probably 90 percent of us have seen each other at every sale in the western U.S.” explains Hughes.

These core buyers each represent several outlets to local and international markets.  Hughes might be there buying bobcats for someone in Italy and muskrats for someone in China.  Other buyers have similar connections. “These guys have access to all the world markets.”

At these sales the furs aren’t pre-graded or sorted, they are simply placed on the table for each fur taker who has consigned furs.  The valuation of the furs is based on a predetermined price the buyer’s outlet is willing to pay.

NAFA sales held in Toronto four times each year attract nearly 700 buyers who compete for lots that might exceed 1000 pelts each in front of live auctioneers.  Impressive numbers of skins are separated into grades formulated by a complicated grading system involving size, color, fur density and the discretion of one fur grader tasked with sorting hundreds of thousands of skins. 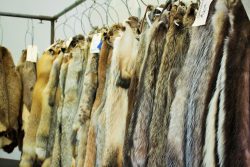 Josh Lodge has been the Montana Receiving Agent for North American Fur Auctions (NAFA) for the past eight years.  Lodge’s job is to collect furs from fur takers and make sure they get to the NAFA sales.  Each wild fur is tagged with a NAFA bar code and stacked in a warehouse in Toronto with thousands of other skins from fur takers like me.

“The grading in a sense is a lot like the blue book value for cars.  Just because you have a 2012 Chevy truck there are a lot of different things that will affect the value of that truck”.  Lodge explains.   A look at NAFA’s grading categories shows extreme color variations and fur quality from localized regions around the country.   A Montana raccoon for example would likely be graded as a Western North Central type and a muskrat from western Montana would be called black versus one from the east that would be called red.  The distinction is made by observing the guard hairs on pelts which vary in color regionally.

NAFA fur graders know where the furs came from and they know what the buyers expect to see in a particular grade.  With literally millions of furs at a single NAFA auction pre-grading is a necessity.  Lots meeting the criteria for a specific grade and quality are packaged by volume and a small sampling of graded furs are displayed for viewing and bidding.  The buyers can’t sort through millions of furs during their limited time on the floor so they’ve got to trust that the fur grader got it right.

Unlike state auctions where the valuation of furs is dependent on the buyer, NAFA establishes a minimum value for each lot and if that minimum isn’t met the fur will be stored until the next sale.  This benefits the fur taker long term but if the fur doesn’t sell, the fur taker doesn’t get a check right away.

Even with all the work that goes into producing wild furs they aren’t the back bone of world fur production.  “Wild furs are riding on the coat tails of ranch furs no doubt about it.” Lodge explains.  “There is more ranched fur produced world wide than wild fur by a wide margin.”

Worldwide production of ranch mink alone is estimated at over 50 million pelts.  The total wild fur produced by fur takers in North America, including every species from red squirrel to coyotes, doesn’t reach 10 million annually.  Ranched furs are very consistent in size and color which enables garment makers to produce uniform product lines and nature doesn’t provide cookie cutter furs like a ranch can.

In 2014 coyote skins with the distinction of being a select extra-pale grade from Montana brought more than $100 dollars each.  Other grades with specific sounding names like extra-heavy pale or extra-pale prairie skins hit the $80 dollar mark.  Moving further west across the U.S. the grades and prices dropped for select skins by region until reaching eastern Washington and Oregon where top skins sold for $35 dollars.  Fur takers on the opposite side of the country averaged just $20 for their best coyote skins. 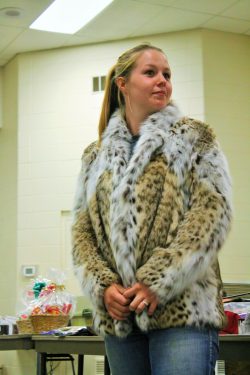 The highest prices paid in recent years have gone to western bobcats.  This article has exceeded expectations of even the most optimistic fur takers with prices breaking the $1000 dollar mark even as other fur articles dropped.  Bobcats stretching 40 inches with wide white bellies and big dark spots continue to fill a hungry niche market that includes trim on collars and cuffs.  Places like Montana, Wyoming and Nevada produce these unique wild skins leaving other bobcat producing states like Maine, New York and Minnesota a $100 bill for their best bobcats.

A trade embargo in Russia stopped the annual migration of several hundred thousand raccoon skins in 2014 and right now nearly 700,000 remain in storage indefinitely in Toronto.  The death of one man from Germany dropped the eastern Montana badger prices that same year from $100 to $30.  The realization between Chinese and Korean buyers in 2013 that Korea wanted the bellies of muskrat skins and China wanted the backs halted competition reducing the average top prices paid from $12 to $6.  A shaky world economy has some buyers scratching their heads about why bobcat prices remain so high.  The questionable U.S. economy may cause a down turn in prices recently enjoyed for western coyotes which are used for the trim trade and rarely leave the country.  And then there’s all that ranch fur flooding the market.

Unlike fur farms who have the luxury of harvesting skins when they are at peak value, wild fur takers must work within season structures  established by government agencies and inevitably produce furs of various sizes, shapes and colors.  But when the prices paid for ranched mink goes up so do wild fur prices because wild fur compliments ranched fur especially on collars and cuffs.  Garment manufacturers are looking for furs with a specific quality to make a garment in their product line or a specialty item and there’s a maximum price they’re willing to pay.  And this is where the real economics of the wild fur trade is revealed.

In the 1970’s major garment manufacturers in New York and Los Angeles purchased raw dried skins from fur buyers and sent them to dressers (a sophisticated word for tanneries) just down the street where they were transformed into soft, supple materials.

Workers punched a clock and stayed busy using special equipment to make herring bone cuts and matching furs with proprietary patterns.  Finished garments were displayed at retail stores in the same city where they were made. This close knit dynamic shifted to Russia in the 1990’s.  Another shift occurred at the turn of the century leaving China at the helm.  The few U.S. manufacturers remaining no longer oversee dozens of laborers on the shop floor, instead they design patterns and send them along with furs for Chinese workers to cut and sew.

“When I started 30 years ago North America was the number one place in the world where fur coats were sold.” Says Swick.   “But no longer, the number one consuming nation for fur coats now is China.”

At his store front in Big Sky, Montana Swick has observed that it’s often young women on vacation wandering into his store with male counterparts who walk out with a new garment.  “It’s not old ladies” Swick says of his customer base.  And it’s not people from cold climates either.  Florida, Texas and California residents are the top purchasers of garments ranging from $1000 – $29,000 while on vacation at the local ski resort.

For retailers to absorb $1000 bobcats purchased at last year’s highs those costs must be added to the price tag.   Ultimately the price paid for each fur including preparatory dressing, export, manufacturing and import are dictated by what the retail consumer is willing to pay when they’re standing on the show room floor.

In 2013 wild fur prices enjoyed a 30 year high, now prices are in steady decline leaving fur takers little financial incentive to buy supplies and spend weeks in pursuit of wild furs this season.   But I’ll be out there setting traps and calling coyotes anyway because it’s fun and unlike the mountain men who made the fur trade famous in the early 1800’s I can’t just move on to hunting buffalo.