For me, early June is a time for remembering. I think of my youth when baseball was the sport of the day, literally every day. My Gramma’s birthday occupies a spot on the calendar and of course, like this Tuesday past, I think of D-Day, June 6, 1944. With the heroes that stormed the Normandy beaches in mind, I thought a look at the guns they carried in defense of liberty would be quite timely.

One of the finest and fiercest American Generals of all time, George S. Patton called the M1 Garand “the greatest battle instrument ever devised.” In service between 1936 and 1959, the M1 was a 9.5 pound semi-auto rifle chambered in the powerful 30.

06 Springfield cartridge. The gun was charged with an 8 round en-bloc clip, and used aperture rear and front post sights. It was a gas-operated, and had a rotating bolt. In total near 5.5 million were manufactured. Its cost during WWII was $ 85.00, around $1200.00 in today’s dollars. Still a bargain.

John Browning’s timeless design, the 1911 pistol chambered in .45 ACP was the standard side arm of the U.S. military for over 70 years. The 1911 is more popular today than ever. Many believe it to be the greatest handgun of all time and I’m in that group. Adopted in 1911, the pistol underwent a few modifications and in 1924, the M1911A1 went into service. Even today, some special operations troops still use 1911 variants. It truly is the best ever. 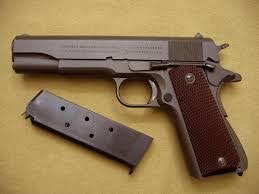 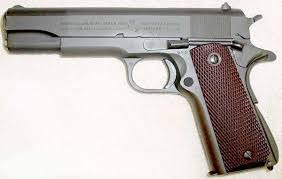 The M1 Carbine was originally designed for rear echelon troops, but soon found favor with American Airborne forces. This light handy little rifle chambered in .30 Carbine was not overly powerful, but it served admirably in combat.

The Browning designed BAR (Browning Automatic Rifle) was a powerful (30.06 Springfield) shoulder fired machine gun. Capable of firing up to 650 rounds per minute, the BAR provided outstanding cover fire for infantry soldiers. No doubt, the sound made by a BAR was sweet music to the ears of G.I.s. 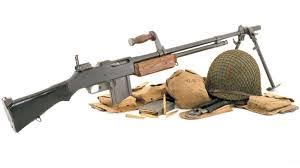 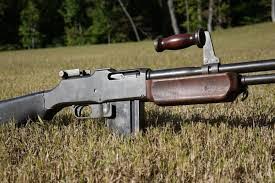 And finally the submachine guns used by American troops; the famous Thompson M1928A1 and the M3, “grease gun.” The Thompson was a terrific firearm, but it was expensive and time consuming to produce. Another alternative was needed; enter the M3. Both guns were reliable, accurate firearms that in the hands of American soldiers and sailors, helped save the world.

A few years ago, I lost a friend who was a WWII vet who arrived in Normandy a couple of weeks after D-Day. He carried a Thompson as he and his comrades fought their way across France. Of course his unofficial moniker was “Machine gun Harry.” Recently, I befriended another WWII veteran. Fred asked that I come visit him and chat a bit about the Skeet game. He first started shooting Skeet during his time in England during the war. It was fun to see the twinkle in his 94 year old eyes as we chatted about a game we both love.

D-Day also stirs memories of my Dad. He spent countless hours as a gunnery instructor in B-17 bombers. I still see that diminutive airman with the cocky smile manning a pair of .50 caliber M2s. Last week, I told of how we passed my Dad’s rifle onto my nephew; we should all pass onto our children the story of the longest day.