Flathead Lake Famous Whitefish Bite Might Be Starting
By angelamontana

Many anglers will tell you that the whitefish bite on Flathead Lake that they have experienced the last week is well overdue. For the last several years, anticipation for the “Bite” has always been there. Some years it didn’t happen at all. Last year, there was better activity and this year is starting out strong.

The Captain, Don Beardsley and Ross Tate from Missoula went to see first-hand if they could catch some of these tasty table fare. They were successful.

Tate, who earlier this month had success by the Narrows on Flathead Lake, was fishing for the first time this year in Big Arm Bay with Beardsley and the Captain. The bite is early, at daylight, and remained good for the half dozen boats that anchored right off the state park boat ramp at Big Arm till mid morning.

Most were anchored in 50-60 feet of water and all the boats were catching fish. As the morning went on boats headed north around the point and fished the south side of the shore in 35-50 feet of water. Even though the bite slowed down around 10am, it still was consistent enough to keep a few boats fishing till early afternoon.

The trio managed to fill a cooler with around 40 fish–not bad for the first time out. They were using Zimmer’s Rattle-D-Zastor 5/8 ounce jig with Zimmer’s fly set up above the lure. You can get the Rattle D Zastor at Bob Ward’s Sports & Outdoors in Missoula! The fish were biting on the fly about half the time.

It’s early, but so far it is a good sign that this might be the best whitefish year on Flathead Lake for the whitefish bite in a long time! 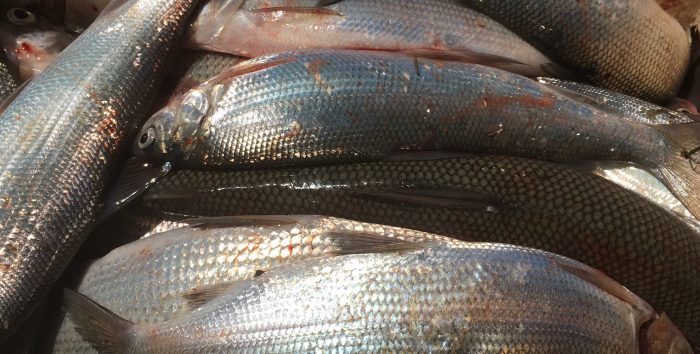