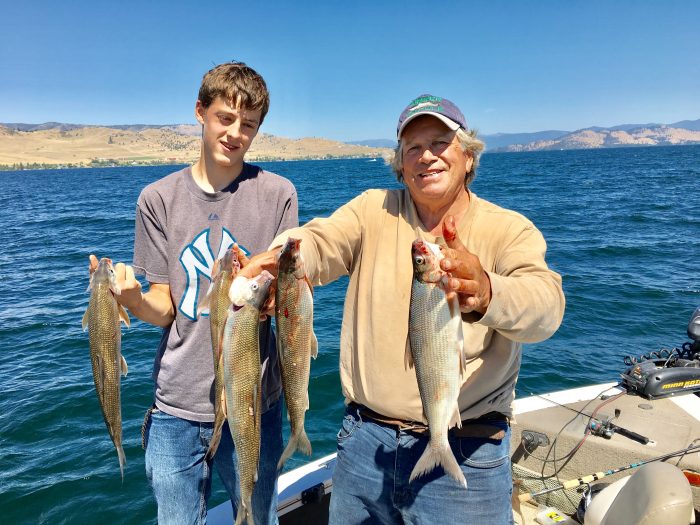 Fishing was slow for the trio as they tried many different spots on the south west end of the lake. However they did see some anglers pull in fish after fish. They ended up with 20 fish for their efforts. This is what Zimmer has heard from his Tackle shop in Pablo “the whitefish bite is on .. It has been heavy in the Narrows, Elmo, Big Arm, Skidoo Bay. 45 to 65 feet depending on place.  It looks like it isn’t going to die out any time soon. The north end of the lake also. It could last anywhere from 2 ½  to 5 weeks depending on the perch coming in.  There are a lot of perch for them to feed on”.

Matt McCombs from Mo Fisch told the Captain that on Saturday some of his buddies did very well on the Whitefish at the Delta and some west lake points by Lakeside. “Everyone I spoke with has a cooler full of whitefish late Saturday afternoon.”, said McCombs.
There are a lot of perch on the north end of the lake according to McCombs, ” I have been fishing 26 years on this lake it’s the most perch I’ve ever seen on the surface of the lake, it is just covered with perch”. Whitefish love to aggressively feed on the perch fry.
Rattle D Zastor lures are available at Bob Wards in Missoula.