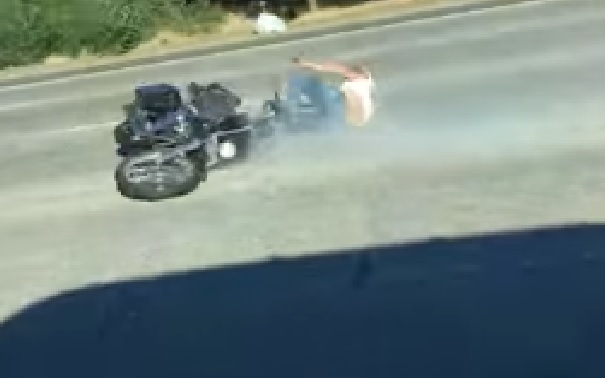 It is motorcycle season everywhere in the lower 48, and this is just another cringe-worthy reminder of why protective gear is so important.

WEAR YOUR GEAR, FOLKS!  I am pretty sure this California motorcyclist’s road rash is not something anybody would want to see. Ugh…

This guy merged onto the I-80E (Sacramento, CA) on his motorcycle as we were driving in the fast lane. As he merged, his bike would shake and wobble. He sometimes would only have one hand on the handle bars while it was shaking!! We couldn’t figure out why it was shaking, but we noticed it would only do it once he hit high speeds. We paced him for 5-10 miles after watching him “almost” loose control (about 5 or 6 times), so I got my phone out, thinking “its only a matter of time before he crashes” and I wanted the video as evidence in case anyone else got hurt. Sure enough the very moment I get my phone out, happens to be the time he loses control. We pulled over immediately…..called 911, and help the man (and his bike) off to the side of the road as quickly as possible. He did walk over to the right shoulder by himself. His face was really mashed up (his nose looked broken) and arms covered in blood. Crazy road rash!!! I still wonder how he’s doing 🙁

Oh, and the sirens you hear in the background aren’t because he’s being chased by the cops….my kids were watching Peppa Pig…..it was just a coincidence 😉