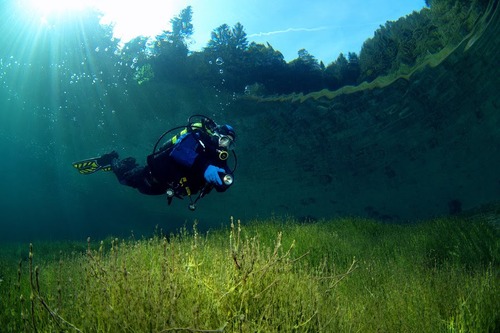 Boaters must steer clear of scuba divers
By angelamontana

FWP warns Montana boaters to steer clear of scuba divers.  Divers should always display their “diver down” flags on their boat or float them while they are in the water.  While some people on the world wide web claim the above picture was taken at more than 300 feet deep at Flathead Lake, it was actually taken at Sameranger in Tyrol, Austria and posted on 500px.com by Kristallklar . The photo was taken in a depth of approx. 3m (~9 ft.) in the fore waterside of the lake.  However, Flathead Lake IS beautiful and still a major attraction for scuba divers in Montana, along with other bodies of water across the state.

See the report by FWP below: 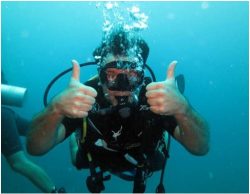 Most people don’t think of Montana as a scuba diving destination, but it is becoming a popular way of experiencing Montana’s waters.  With that, Montana FWP reminds boaters, anglers and others on the water to be on the lookout for scuba divers.

To alert boaters of their activities, divers will float a “diver down” flag (the traditional scuba flag) on the water – or attach it to their boat – to mark a dive area where divers are active and might be near the surface.

Boaters can prevent an accidental collision with divers by staying clear of the 200-foot safety zone around the diver down flag.

The diver down flag is red bisected by a white diagonal stripe. The stripe runs from the upper left corner of the flag to the lower right corner. The diver down flag may be displayed on a float, or the dive boat, and should be lowered, or removed from the water, once the divers have safely exited the water.

In Montana, motorized boaters must stay 200 feet away from a diver down flag. A motorboat may only enter the 200-foot safety zone by use of sail or oar.

In an emergency, or if there is insufficient water on either side of the 200-foot safety zone to pass by and stay out of the zone, the motorboat operator may use power within the zone but may not exceed no-wake speed.

For more on Montana’s boating laws and safety, go to the FWP website at fwp.mt.gov on the Recreation page and click Activities then Boating, Floating, and Kayaking.