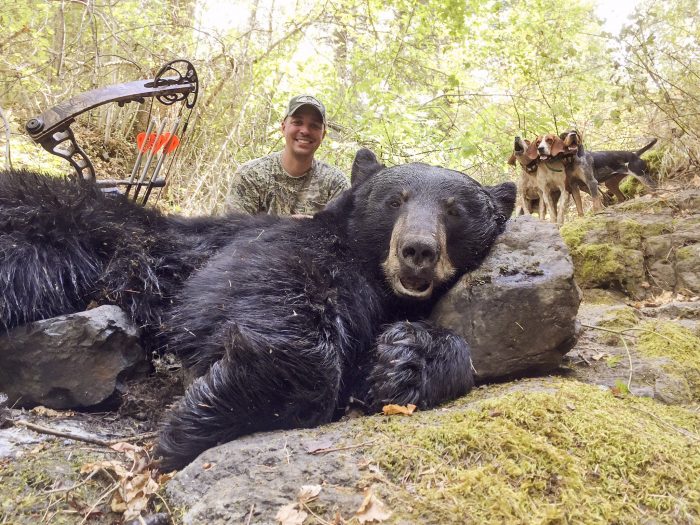 Tom Claycomb III lives in Idaho and loves hunting bears. He writes outdoor articles for various newspapers, magazines & websites, including numerous articles on bear hunting, and he has taken many kids bear hunting for the TV show Kid Outdoors. If it’s something outdoors, Tom probably likes it. You can read some more of his writings at: www.Amazon.com, www.TomClaycomb3.com, and www.BassPro.com.

Tom wrote an article for Havalon Knives back in 2012 about bear hunting in the fall as opposed to the spring.  Keep in mind that he is referring to Idaho regulations, as it is not legal to bait bears in Montana, but I know many Montana bear hunters who hunt in Idaho, too. What are your thoughts on Claycomb’s suggestions?

You can bait bears in the fall but it’s much harder than in the spring. For one thing, a lot more natural food is available to compete with your bait. In a berry-good year every draw on the hillside will be choked with berries. That’s why fall bear baiting requires advance planning.

Advance planning is critical if you’re thinking of bear hunting with hounds, too. Without it you may have no choice than to just bring your wife’s Chihuahuas. So, if you’re headed west for a do-it-yourself bear hunt, baiting and hounds probably won’t be as productive as a spot-and-stalk hunt.

I see quite a few bears in the fall when bow hunting for elk. In some areas I’ll see five in a couple of weeks of hard hunting. You’d see a lot more if you climbed on a mountain and glassed. Then you can sneak in on quite a few of them.

But the exact opposite is also true. Many times bears are in thick cover. So if spotting isn’t productive, head for the thick brush just like you were elk hunting. They’re there – I walked up on three last year while bow hunting for elk.

When spotting and stalking, keep in mind that in the fall bears are on a feeding frenzy to store up fat for the winter. In the spring daylight and dusk are usually best, whereas in the fall you may see one anywhere, anytime of the day. Two years ago when Joe White with Kanakut Camps joined me for a three-day elk hunt, we saw three in the middle of the day.

Of course, when bears feed will be determined by the available food source that particular year. A good berry crop will draw them to the berry patches where they gorge themselves and then lie down and sleep. As berries ripen they migrate to higher elevations. What if berries are scarce? They’ll roam more and you’ll be likely to see them anywhere. In bad years they even show up in downtown Boise looking for a handout.

Last September I walked through a berry patch and not 15 feet away was a cub eating berries like he was starving. A day or two later we came upon a bigger bear in a berry patch. Bears like to camp out in berries.

Just because you find a berry patch doesn’t mean you’ll find bears. Look around for sign. If they’re in an area they leave plenty of sign. If you can’t find sign, find another berry patch. Get on a ridge above the berries and glass at dusk. More than likely you’ll see some bears.

6.  When Food is Scarce for Bears

When food is scarce and bears are hungry, they move quickly across the slopes in search of food. You may have to hurry to catch up with them. When my nephew came back from Afghanistan I took him grouse hunting, and we saw a nice bear 500 yards across the canyon, moving along at a good clip. Ben wanted a picture, so he hustled after the bear. At 30 yards he pulled out his cell phone and got the photo. I don’t know what was in that bear’s mind, but he sure seemed headed somewhere. I see a lot of them acting like that in the fall.

7.  Know the Water Needs In Your Area

In New Mexico where the climate is arid, my brother-in-law hunts water holes. Back home in Idaho that won’t work – we have so much water they find it everywhere. However, I see bears digging around rock piles hunting marmots and ground squirrels. As a kid I remember reading an article that said squirrels must be like chocolate morsels to bears because a little ground squirrel sure can’t give them as much energy as they expend digging.

Finally, wherever you plan to bear hunt local people are often a big help. In many places, the locals don’t even hunt bears. Also, game wardens will often give advice because they need to deal with nuisance bears. The more information you can gather, the more likely you’ll be hunting bears where your odds are high. I love bear hunting for many reasons – and I love it even more when the odds are high.

Here’s an example of a 3-day Idaho bear hunt from 2015 that has nothing to do with Tom Claycomb III or Havalon Knives, but still.  It shows a fall Idaho bear hunt.