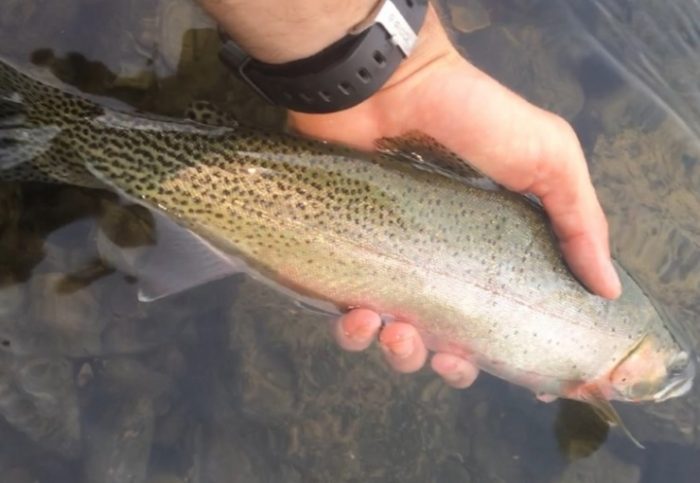 It didn’t take long for me to hit the the Clark Fork after I saw flows at 6,000 cfs, and holding strong. Conditions were great! Not a cloud in the sky and an occasional breeze to keep me cool. Water clarity was excellent. There wasn’t much of a hatch going on. The caddis clung to the streamside trees. Occasionally a cutthroat exploded on the surface, but not frequently enough to predict when the next rise might occur. Surprisingly,I didn’t see the occasional white mayfly I usually find on the water this time of year.

Fishing was fairly tough. We spent close to four hours on the water, and only had a handful of trout to show for it. I did swung up a beautiful 15″ cutthroat on a #6 olive Woolly Bugger . . . on my second cast of the day. A few casts later, I missed what felt like a small fish, or a timid eat. I threw a few of my favorite dries at the sporadically rising trout, and had one stunning 18″ rainbow eat my #14 purple Rocky Mountain Mint. Unfortunately for me, right when I thought I had him beat, my knot unbuttoned. I watched him smugly swim away, like he knew he had beat me. I had a few words I wanted to say, but didn’t because I had no one to blame but myself. Other than that, I nymphed up one rocky mountain bonefish on a #18 red Copper John.

If I were to go to the Clark Fork again today, I would concentrate on the evening hours. We only fished from 1 to 5 p.m., and I know the last hour of light is key on these hot summer days. Be sure to have different sizes of caddis patterns. I saw everything from size 14 to 20. If they aren’t eating the caddis, throw a #12 purple Hippie Stomper, #14 Purple Haze, #12 H&L Variant, or a #12 Royal Wulff. Want to swing? Toss a #6 olive Woolly Bugger, a #6 Polar Minnow, or a #2 Complex Twist Fall.

(via Dillon Given; Feature photo via North 40 Fly Shop)