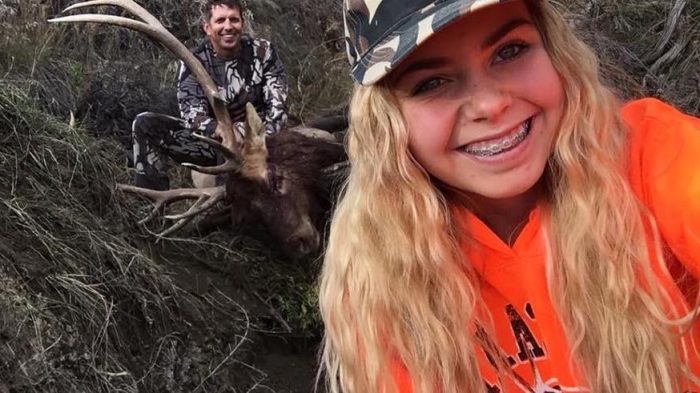 Calling Elk Effectively with More Than One Hunter
By angelamontana

When you’re hunting elk with somebody, you want to have effective calling strategies to get your elk.  It is pretty important.  An article on GoHunt.com discusses the importance of just that, emphasizing the importance of establishing roles first and same-page thinking.  Here are three scenarios that spell out the caller and the shooter’s jobs:

Like I mentioned in the opening of the article, sending in the shooter silently can be deadly effective and is one of my favorite plays on a bugling bull. Like most of you, I spend nearly all of my season hunting public land elk—most of which have likely been called to heavily. Because of this, not all of our encounters end up like those on your favorite hunting video or program. When elk are rutting they have an inherent drive to respond to calls; it’s written into their DNA. While this is generally an absolute fact, most situations get messed up by hunters either conveying the wrong message or acting unnatural. Unless a pressured bull is in the right mood, it can be tough to go in swinging and expect a favorable outcome.

When a bull is located, I like to first listen to his demeanor and try to get an accurate judge on how worked up he really is. Generally, if a bull is responsive, but stays in one spot or is slowly moving away, he likely has cows and telling you to “Stay away!” These bulls can be difficult to call in unless you’re right on top of them and past elk and hunter interactions can even make that difficult. If I have any doubt whatsoever that this bull may be difficult to call in we will go at it with the silent approach.

Your job is to sell yourself to this bull and create just enough of a distraction to anchor him in a position and put him on edge. You want to push him enough so that he goes into a rage. We don’t want this bull losing interest and taking his cows with him and heading for the next basin before the shooter can get into position. Remember, this bull could be a few hundred yards away at this point and can’t see you. Make some noise by kicking rocks, breaking sticks and otherwise causing a bunch of commotion; this will only add to your realism. If all else fails, simply mimicking every sound the bull makes can be a surefire way to get on his nerves.

Move quickly and silently! While the caller is keeping the bull occupied you need to move in on the bull as quickly and silently as possible. Remember to keep a close eye on your wind, one small whiff of smell in the bull’s direction can send him packing. Once you close the distance to under 75 yards begin slowing down and keeping a sharp eye out for the bull, satellites and cows. Sometimes the bull may be raking a tree which can provide a great distraction for closing the distance quickly.

Generally, the shooter is not making a peep on this approach; however, in some situations, you may need to. Mistakes happen constantly while elk hunting, What happens if you bump into his cows first and spook them? React quickly, throw out a lip bawl bugle and charge the bull! This mimics a new bull that snuck in on the herd and is attempting to steal a cow. Be prepared as the bull is either leaving with his cows or coming absolutely unglued and charging you!

Going toe to toe with a bull in close proximity is unlike anything else in this world and something all elk hunters dream of. Again, I like to approach every bull as if they’ve been called to a thousand times over and I need to really sell my approach to them to prove that I am indeed a genuine elk and someone who wants their cows. Each morning, I’ll start off by cruising ridgetops either waiting for a bull to locate or by soliciting a response with a location bugle of my own. Once I get a response I’m going to try to pinpoint the bull to within a small area. Next, I want to sneak in on the bull as close as possible, keep the wind in mind, and get ready for some fast action! With this tactic, I am attempting to draw the bull past the shooter.

As the caller, your job is to try to get within 100 yards of the bull’s last known location and setup while the shooter moves ahead another 25 to 30 yards. Think about your setup here. We want to act like an elk and create a realistic scene. Set up where you have plenty of cover and will have the ability to move around if needed. Once the shooter is ready, I like to first let out a few soft cow calls in case the bull is very close. At this point, one of two things is likely going to happen: If the bulls responds with a bugle, I want to bugle right over the top of him with a challenge bugle. Basically, I am saying, “That is my cow and you need to stay away!” If the bull does not answer, I’ll wait a few more minutes and then let out a non-threatening social type bugle like the locator. If the bull responds to this, I will now bugle over the top of him again issuing a challenge. At this point, you want to start making some noise and creating a commotion. Respond to any of the bull’s bugles with more of your own; raking a nearby tree with a large branch will display your dominance and further enrage the bull. If the bull abruptly shuts up do not panic; this could mean he is sneaking in to check out his would be challenger. Continue with your raking and issue more threats.

Your role in this situation is fairly straightforward. Move ahead of the caller 25 to 30 yards as quietly as possible and set up in an area where you have good visibility and plenty of shooting lanes. Range some landmarks and prepare for some action. Do not set up behind cover. Instead, rely on your camo and set up in a area that will provide the best opportunity for drawing and shooting. Once you’ve picked your spot, you need to commit to it and stay patient. Unless a situation arises where the bull is obviously moving away you do not want to move and risk being spotted.

Depending on the terrain and vegetation, the caller and shooter may not be able to maintain eye contact. Before splitting up it is important to establish a time frame for when the caller will begin his sequence. The above calling situation is solely based upon what happens when things go right. Many things can happen in this situation and it will be important for the caller to react accordingly. Try not to overthink your actions here; imagine you’re actually an elk in this situation and think about the message you are conveying.

Like most things in the elk woods, plans can fall apart in an instant and it will be important for hunters to adapt accordingly if they wish to consistently fill their elk tag. The above situation can be a deadly combo when it comes to herd bulls, but what happens when the bull responds but refuses to move and advance towards the shooter? These are times where thinking outside of the box can quickly turn a encounter into a successfully punched tag. To begin, let’s break down this situation to the basics: We have a herd bull that is likely guarding a hot cow due to the fact that he issuing challenging bugles to us (the intruding bull). At this point, the bull may or may not believe we have cows, but why would he leave the sure thing to find out when he may lose everything if this new bull is bigger and badder? What if a cow just happened to wander between these two bulls? Would he break then?

For the next scenario, we are going to consider that you and your partner have closed the distance and made vocal contact with a hot herd bull. He has answered your challenge bugle, but won’t budge and now the ball is in your court to force a play. With this scenario, the shooter is going to aide the caller with their own calls.

Employing this tactic will largely rest on the shoulders of the shooter. Conditions must be right for this to work and the curiosity of the bull and available cover must be strictly considered. If the bull your caller is working is fired up, but not advancing, it may be time to force an action. Let out a few loud, drawn out and demanding cow calls. If the herd bull responds with a lip bawl or welcoming bugle (normal bugle followed by several chuckles), you can instantly respond to him with several calls in recession and start walking directly at him though watch your wind! Crash through the brush and keep your head on a swivel. The herd bull thinks he has won you over and may start raking to show dominance for his new cow. Be ready to draw on an instant if necessary. A second and less risky option is to play into your caller with the exact same steps. Move back, toward your caller, and issue rapid cow mews as you go for 20 or so yards. The bull won’t instantly follow, but now he knows he can sneak to your last known location to scent check and see if this new cow is in heat. Quickly turn and sneak back to your last spot—or further if possible—and setup again. Wait patiently as the bull will likely sneak in silently now.

Listen to what’s going on in front of you. If you hear your shooter make cow calls, it’s time to spring into action. Let out a huge lip bawl to demand this new “cow” joins your herd. If the shooter begins heading toward the herd bull you need to react quickly and try everything in your power to call “her” back. This will add a bit of realism to the whole scenario and could provide some distraction for the bull and allow the shooter to get a shot. If the shooter heads in your direction, throw out a welcome bugle and begin raking to show dominance. This may bring the bull running, but, nonetheless, it will add realism and increase the chance of him coming to scent check the new cow.

As with all of the other scenarios staying mobile and fluid with your calling will be key here. From the first moment you make contact with a bull you are running on a time clock to make something happen before he gets suspicious or bored and moves off. Try your best to read into the mood the bull is in and react in a manner that will swing the odds in your favor.