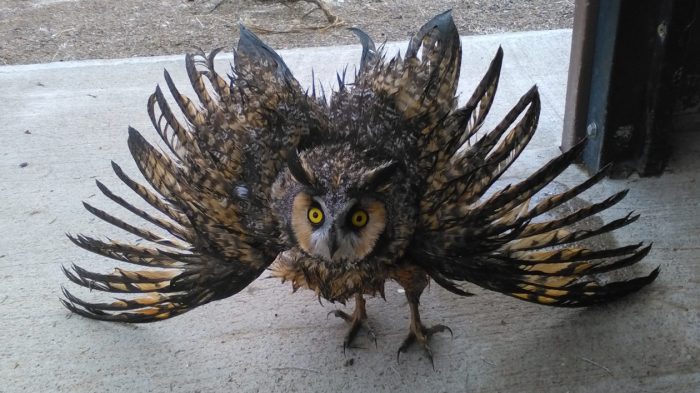 Poo Poo Screens Are a Good Idea…
By angelamontana

Have you ever gone inside an outhouse and found an animal looking back up at you below the toilet seat?

Here’s a story by by Kris Millgate on Cool Green Science with a story that will gross you out and make you think “aw” at the same time:

Visiting a public lands outhouse is not always a pleasant experience for humans. It’s even less so for birds. Yes, birds. Here’s why there’s an owl in the toilet – and what we can do about it.

I’m shooting scenic footage in an unknown and rarely visited place in southern Idaho called Curlew National Grasslands. Even more unknown is the reason why a man is on the roof of one of the outhouses. Above the short sea of sage and sedge, I can see him shuffling around near a black pipe. That pipe vents the unmentionable fumes festering inside that small building no one wants to enter, but eventually everyone has to.

I unhinge my camera from tripod and make a run for the restroom. Chris Colt, Caribou-Targhee National Forest wildlife biologist, is at the base of the ladder leading up to field technician Drew Retherford. Retherford is on the vault toilet’s roof with a drill. The exchange goes something like this:

“Putting a screen on the vent to keep birds out,” Colt says.

“Wait. What? Birds in the bathroom?” I say stunned.

“In the worst part of the bathroom and more often than you think.”

I’m grossed out and fascinated at the same time. I dig for facts while staring at a situation so disgusting I should look away, but I can’t help myself.

“That large diameter pipe is pretty enticing to certain species of wildlife like cavity nesting owls,” Colt says. “They see it as a tree cavity, like a tree with the top broken off that’s rotted inside. They climb down in there and maybe make a nest and then they can’t get out.”

And I don’t want to go in, but Joe Foust will. He’s the biologist who rescued a boreal owl in a Boise National Forest bathroom in 2010.

“When I got there, there was a post-it note on door, ‘Owl in toilet. Don’t use. Go down the road for other toilet.’ I looked down there and sure enough, he was just sitting there looking up at me,” says Foust, Boise National Forest wildlife biologist. “It got a little messy when I tried to get him in the net. He didn’t fare well after that. Nor did I. He went ballistic and started bouncing up and down and just got soaked.”

So did Foust who took a few unpleasant pictures of the retrieval operation deep in the bowels of the campground bathroom. Those pictures ended up at the Teton Raptor Center in Wilson, Wyoming.

“There are very few studies of what’s down in a vault toilet. Stuff is just pumped out and it’s not a sexy thing to study, but it happens all over the country with all kinds of cavity nesting birds,” says David Watson, Teton Raptor Center Poo-Poo Project development director. “Cavity nesting birds are looking for that quiet, dark space. They don’t realize that pipe sticking up out of the toilet is a death trap for them.”

Watson is proudly known as the ‘Poo-Poo King.’ He’s the director for the center’s Poo-Poo Project, that’s short for Port-O-Potty Owl Project. He’s also one of the creative minds behind the 12-inch Poo-Poo screen keeping birds out while also letting the stink out. The one-piece, steel screen, selling for $29.95, comes with four screws and installs in five minutes. Government agencies and non-profit organizations in all 50 states are installing them. Most of the vented vault toilets are on public land in remote places where the commute costs more than the construction project.

“The biggest difficulty is the time it takes to drive to your next toilet,” Colt says. “You get there, there’s maybe two toilets on a site, it takes 10 to 15 minutes and you’re done and moving on.”

The Teton Raptor Center sold its 10,000th Poo-Poo screen July 31 to, ironically, a concrete company in Montana that makes vault toilets. While 10,000 sounds like market saturation, that’s really just a small drop in the bucket when you consider the overwhelming number of outhouses nationwide not to mention other types of pipes.

“Chimneys, irrigation pipes, mining claims. There’s just a lot of open pipes and birds and pipes just don’t really work well together,” Watson says. “If we can do our small part to help with one aspect of it, we’re making a difference in the conservation world.”

Colt agrees. He’ll have every outhouse, 25, in the Westside Ranger District screened this year. I’ll verify that by looking up at the pipe instead of down into the hole the next time I visit the Curlew.

“I hate to see some owl go down there, get stuck and get killed, or worse be still alive and have to be fished out,” Colt says. “People can argue that it’s crazy, but if you can stop one owl from going down there, it was probably worth it.”