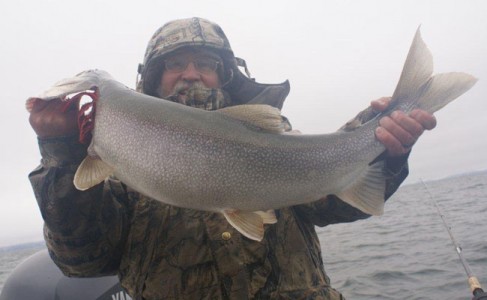 The Fall Mack Days Fishing Event on Flathead Day is moving into the fifth week-end of the eight week-long event sponsored by the Confederated Salish and Kootenai Tribes to reduce the numbers of non-native lake trout in Flathead Lake and increase the numbers of native bull trout and westslope cutthroat trout populations. Anglers can choose to fish one day or every day of the event. Entries are taken up until the last day. Up to $150,000 in Cash and Prizes will be awarded November 12th  the last day of the event. To qualify for the drawings an angler needs to catch one lake trout for a ticket that will be put into the drawing barrel. Prizes start at $1,000 and go down to $500. A special drawing for the Tuesday-Thursday anglers will be held with six $50 prizes being drawn plus the lake trout total gets added on the weekend totals for the bonus amounts of the anglers. Tagged fish prizes are awarded on any day of the event. Fish entries are taken Tuesday-Sunday. There is still a $10,000 tagged lake trout swimming out there with three $5,000 tagged fish, five $1,000 and over 6,000 with values from $500-$100.  Thirty eight tagged lake trout have been turned in so far with the highest value being $200.

Fishing on Flathead Lake in the fall takes some gritty, hard-working, tough anglers-men and ladies. Winds can be ferocious at times and it was again over the fourth weekend. Friday and Saturday many were wishing they had more layers of clothing on and Sunday which was warm and calm the anglers were taking layers off and enjoying the calm water and warm temperature. You couldn’t ask for a nicer fishing day but many had trouble getting the fish to bite-it was just too nice. Friday’s total was 367, Saturday 388, with Sunday a much nicer weather day the total was 529 for a weekend total of 1,284. Total fish count so far in the event is at 7,415 which compares with a fourth weekend 7,368 in 2016 Fall Mack Days (17,527 final) and 9,233 in 2015 Fall (19,546 final).

The 70 and Over-Golden Oldies-competition has heated up this year with Larry Karper of Florence leading the group with 284 lake trout and Larry Ashwell at 251, 3rd-Bob Christensen with 141, 4th Dan Olsen of Helena with 45, and 5th Jim Hoover of Whitefish with 30.

Laurie Kreis of Huson continues her lead in the Ladies Category with 114, Bobbie Hereford of Missoula moved into 2nd with 60, Gina Schiff of Whitefish is 3rd with 45, Julie Woolley of Madesto, CA is 4th with 35, and Brandy Hilde of Whitefish is 5th with 26.

Mikanna Garrett of Missoula entered into the 12 & Under Category with one lake trout entry.

Tyler Varga continues to hold 1st in the 13-17 age group with 55 and Abby Hodgson of Kalispell is second with 5.

The second day of the popular Bucket of Fish Competition is coming up on Saturday October 21st. Richard and Laurie Kreis won the 1st day with a bucket totaling 34.15 lbs. Four of the largest fish of the day (30” or smaller) in a boat or from a single angler are put into a bucket and a weight taken. The Kreis bucket divided by four meant that the lake trout were probably around eight pounds each. That was a full bucket of fish. Might need a larger bucket if the weather cooperates and anglers can get to their favorite large fish spots.

There is no large lake trout entered so far. The largest lake trout has to be over 36” and over 24 pounds to qualify. Been reports of a few caught but not landed. Tough to see one in the water coming in close to the boat and then losing it before getting it into the boat.

There is still plenty of time to get your fishing pole out and and try your luck fishing during the 2017 Fall Fishing Event. There are a lot of ways to win. Go to www.mackdays.com for information on the event, fish ID, rules, entry page, etc. Click on the events tab for information. Telephone 406-270-3386 for information.