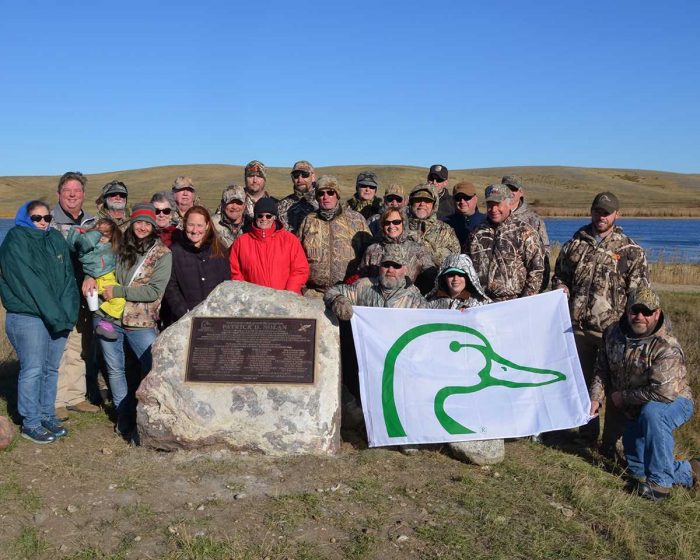 A new hunting blind in Medicine Lake National Wildlife Refuge debuted this week with the goal of expanding access to hunters with disabilities.

Pat Nolan’s legacy of supporting waterfowl conservation will live on through generous contributions to Ducks Unlimited’s prairie conservation work and a new accessible blind dedicated in his honor in Montana’s Medicine Lake National Wildlife Refuge.
Nolan was a fierce Ducks Unlimited volunteer until his death in 2015, following a long battle with Multiple Sclerosis.
With flights of canvasbacks riding the cold October winds, Ducks Unlimited volunteers, supporters and refuge staff gathered to celebrate Pat. A bronze plaque was unveiled that tells the story of his Ducks Unlimited work and lists the names of major sponsors who fund DU’s mission in his name.
“I am humbled at the love and support that was so apparent during the Ducks Unlimited tribute honoring Pat,” said Pat’s widow Ellie. “DU is a wonderful organization, and I am proud to a part of it.”
The dedication and a Big Sky, Montana, dinner capped off the year-long Pat Nolan tribute that raised more than $750,000 in major gifts for conservation in Montana, across the prairies of the U.S. and other priority areas. The Prairie Pothole Region of northeast Montana was one of Pat’s favorite hunting areas, where he could witness the impact Montana has as one of the country’s top waterfowl producers. The Americans with Disabilities Act (ADA) compliant blind helps people with mobility challenges enjoy the bountiful fall flights Pat cherished.
Pat’s Ducks Unlimited involvement began in Arizona in the 1960s where he spearheaded the state’s first DU fundraising events and became its first state chairman. He chaired Arizona’s first national convention and later became a national board member. The Nolans are generous DU supporters and are recognized as Benefactor Roll of Honor major sponsors, Grand Slam life sponsors for the U.S., Canada and Mexico, and Emerald Feather Society members.
DU Director of Development Chris Hildebrandt said the tribute was a true team effort involving DU staff and volunteers, U.S. Fish and Wildlife Service partners, and friends and family of Pat and Ellie.
“This was exemplified by the Pat Nolan accessible blind construction, which was led by DU volunteer and grand slam major sponsor Steve Cunningham, and completed by two sons and five grandsons of Pat’s, with assistance from refuge staff,” Hildebrandt said.
Sean Lofgren, U.S. Fish and Wildlife Service Project Leader at Medicine Lake, says the blind will be used for hunting, wildlife observation and wildlife photography.
“We’re excited about the opportunity to provide disabled users with a quality recreational opportunity,” Lofgren said. “The ADA blind provides us the ability to enhance three of our six priority public uses on national wildlife refuges. The other three priority public uses are fishing, environmental education and interpretation.”
Hunters with a disability conservation license who are interested in hunting the blind and obtaining special vehicle access should call the Medicine Lake NWR at 406-789-2305. 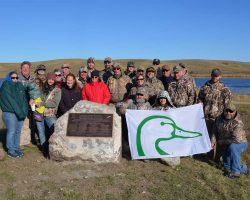