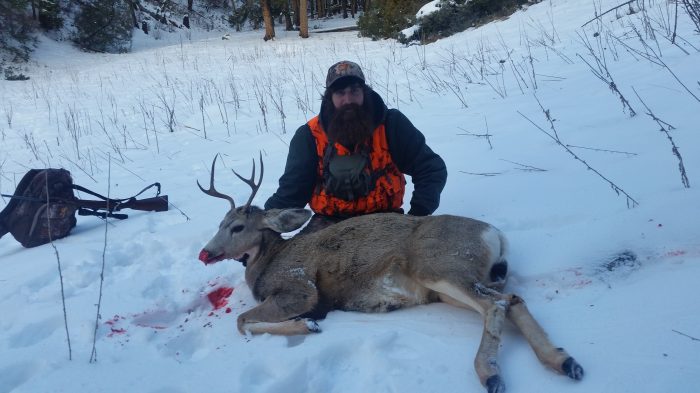 Working as a freelance writer means I don’t have a typical nine to five job to plan my hunts around. It also means I drive a pickup that’s seen (many) better days.

I suspect the old Ford can sense when hunting season is in full swing because that’s when it decides to break down. This year my Ranger blew its five speed gearbox on the last day of archery season.

At that point I had hunted hard for weeks, crossing the state seeing new country but failing to punch my general deer or elk tags. It’s okay, I told myself, rifle season is around the corner and I’ll fill my freezer with my .308 Winchester.

Unfortunately, the dearly departed transmission and lack of funds to replace it left me begging rides to my nearby hunting spots. I was averaging five days a week in the field during archery season and since the start of the general I’ve barely notched that many days total.

Short trips to local honey holes didn’t produce a single animal. I was beginning to fear I had a hungry year ahead of me with only an antelope buck harvested in September to show for months of hunting.

That’s when my buddy Ron stepped in. He’s retired and health problems keep him from hunting much anymore. Despite this he agreed to take me to one of his secret spots for a morning hunt.

We labored in darkness climbing from the trailhead to a ridge above a water source elk and deer frequently visit. Despite frequent stops to rest we reached a high point overlooking the watering hole just at shooting light.

That’s when we saw a herd of mule deer a half dozen strong. The three points of a small buck caught my eye about 90 yards away. I figured this was my best shot at wild meat for upcoming months and lowered myself to a sitting position.

A few moments later the buck stepped into a opening in the timber. I fired one shot through his lungs. The buck took a few steps and tumbled down the hillside to the clearing beneath me.

Ron and I ate tenderloins that night, the first taste of a buck that will keep meat on my plate for months to come.

It’s not the biggest buck I’ve harvested or the smallest. But to me it’s a trophy taken in a season I will remember for mechanical failures and the friends who helped me overcome them.