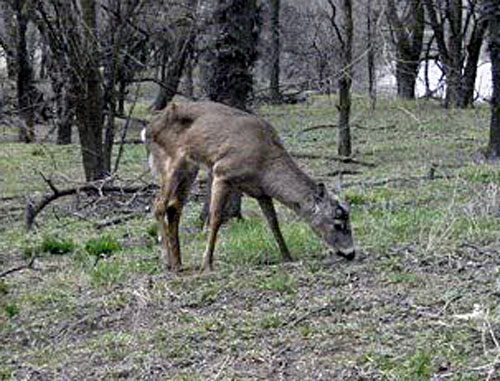 The hunt will begin on Dec. 15 and go through Feb. 15. Licenses will go on sale Dec. 11. The goal of the hunt is to determine prevalence and distribution of chronic wasting disease within the hunt area. This is critical information for FWP as it plans for long-term disease management in the area.

“For the hunt to be successful in obtaining enough samples to accurately determine disease prevalence, participation of both hunters and landowners is critical,” said Barb Beck, FWP Region 5 supervisor and CWD incident command team lead.

CWD is a progressive, fatal neurological disease that effects deer, elk and moose. It was first found in wild deer in Montana this fall during the focused CWD surveillance in south central Montana. So far six deer, four mule deer bucks, one mule deer doe and one white-tailed doe, have tested positive for CWD within the hunt area.

The Bridger Special CWD Hunt will target both white-tailed and mule deer. For the hunt, FWP will sell 600 licenses for each species. The breakdown is as follows:

All licenses will be valid throughout the hunt area for the entire two-month season.

For the hunt, FWP will operate a check station each day from 10 a.m. to one hour after sunset in Joliet. All successful hunters are required to submit their animal for CWD sampling. This can be done at the check station or at the FWP Region 5 headquarters in Billings during normal business hours. Hunters will have 72 hours from harvest to submit the animal for sampling.

Additionally, FWP has established a transport restriction zone, or TRZ, to limit the possibility of CWD positive carcasses moving outside the general area of the hunt. The TRZ will include Yellowstone and Carbon Counties. Whole carcasses, heads and spinal columns will not be allowed outside the TRZ. Hunters must bone out their deer, quarter it taking only the leg bones, or have it processed prior to it removing it from the TRZ. Spinal columns and carcass parts may be left at the site of the kill if allowed by the landowner. Carcass parts that may be removed from the TRZ include:

FWP established a 200-deer quota for each species for the hunt. This will provide enough samples for wildlife managers to assess CWD prevalence with a 3 percent certainty. The hunt will cease when the quota is reached. It is possible for the quota for either species to be met and the season for that species close, while hunting for the other species continues.