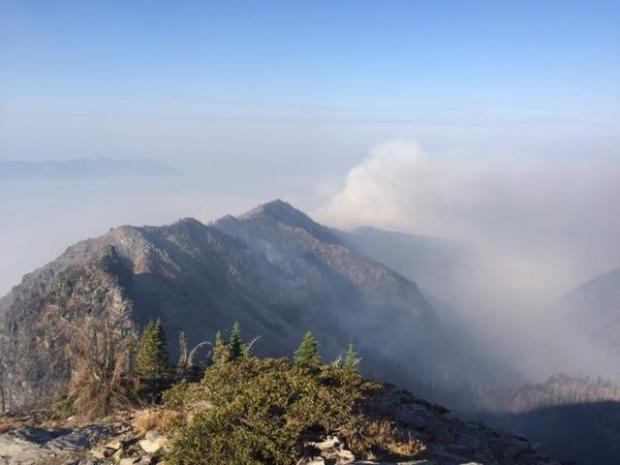 Trout Creek, Mont., December 19, 2017 — In 2017, wildfires impacted over 700,000 acres on National Forest System lands in Montana and northern Idaho.  Substantial impacts to human safety, air quality, recreation, wildlife habitat, watersheds, and general forest health were felt across the region, including the Kootenai National Forest (KNF).  The Highway 200 Complex consisted of several lightning-caused fires that were started on August 30, 2017, ultimately affecting a total of approximately 13,293 acres on the Cabinet Ranger District.

Included in the Highway 200 Complex, the Cub Creek Fire burned 5,823 acres with varying severity, leaving a mosaic of burn patterns that ranged from unburned islands to areas where tree crowns were completely consumed. Much of the area was burned by moderate to severe surface fires which consumed all or most of the organic material on the forest floor.  Viewed from a distance, some forest stands may still appear green because the tree crowns were not burned. In many of those stands, however, the trees are now dead as their roots were killed due to the intense heat generated by the wildfire as it consumed the extremely dry fuels on the forest floor and within the upper layers of the soil.

The Cabinet Ranger District is proposing to salvage merchantable dead and dying trees. and remove danger trees in portions of the Cub Creek Fire area.  The proposal has been identified as the Cub Creek Salvage Project. The project area is located approximately eleven miles south of Trout Creek, Montana in the Beaver Creek drainage and consists of National Forest System (NFS) lands within the perimeter of the Cub Creek Fire, Sanders County, Montana.

The Cub Creek Fire has created the need to: (1) Recover the economic value of forest products in a timely manner to contribute to employment and income in local communities and avoid loss of commodity value; (2) Reduce hazards threatening human health and safety; (3) Re-establish forested conditions and/or facilitate recovery to meet management objectives outlined in the Kootenai Forest Plan.

The Cabinet Forestry Collaborative (CFC), has been engaged with this project to date and will remain engaged throughout project planning.  On December 11, the CFC met with members of the Forest Service Cub Creek Salvage project Interdisciplinary Team to learn more about the progress of the project and provide comments and input.  At this meeting the group voiced their support for salvage operations in the project area to benefit the local economy, while also recommending that a balanced approach be taken to address resource concerns such as wildlife and soils.

The scoping notice for the Cub Creek Salvage Project was released on December 19 for a 30 day comment period which will conclude January 17, 2018. The District will be conducting an analysis of potential environmental effects in the coming months, and all comments received will be considered. An open house will be held January 9 at the Cabinet Ranger Station from 5 to 7:30 p.m. and project team members will be on hand to provide information and answer questions regarding the proposed project.

The draft Environmental Assessment (EA) is scheduled to be released in early May in which another 30 day comment period will occur.    The District welcomes all input into the development of this project during the formal comment periods, at the open house, or in person.