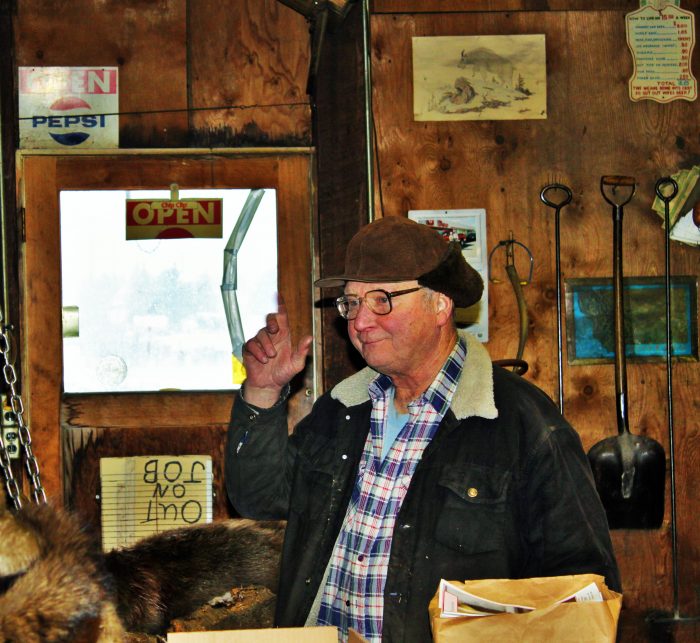 “Pass It On” Says a Montana Trapper after 70 Years of Trapping.

“Hello, this is the Ol’ Drive By Trapper from the bustling metropolis of Deer Lodge” the unmistakable voice of Ed Hebbe III on the other end of the line announces. I got to spend some time with Ed talking about his trapping life in Montana and I’ll cherish those conversations all my life.

After a walk through Ed’s home I got the impression that this man loves the outdoors. His love of trapping began around1942 when he was offered 10¢ for every rat he trapped around his family’s barn. If he cleaned out the chicken coup he was paid an additional dime.

One day a local man told him that the muskrats swimming out in the lake could bring more money than cleaning out the chicken coup. So it was in 1946 when young Hebbe saved enough money to purchase a #1 Victor Long spring trap and a trapping license and then managed to trap 3 muskrats. He sold those first muskrats and quickly ordered two more traps which at the time cost him 23¢ each.

Since those first days trapping muskrats Hebbe spent an enviable lifetime trapping and hunting. After serving our nation in the U.S Army in the early 1960’s Ed married his bride (of now more than 50 years) and shortly afterwards moved to Deer Lodge, Montana where he built a successful welding business and raised his family. Welding for local ranchers helped Hebbe gain trapping access and that’s where his love for trapping coyotes began. 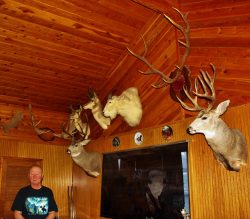 Ed has spent a lifetime hunting, trapping and fishing. In his home in Deer Lodge, Montana Ed shows a sampling of his hunting achievements.

“My favorite animal to trap is a coyote whether I use snares or footholds it doesn’t make any difference either one. They are a neat animal to trap and when you’ve got one in either a foothold or a snare, you’ve done your thing proper.” Ed explained.

One time a man asked Ed if he had a place to put a mule that had died recently. Rather than allow the animal to simply be buried and go to waste, Ed utilized the animal in practical fashion. “That was the best draw station I ever have had in my life, I don’t know what it is with a mule or a horse but that ‘drawed’ them coyotes in. I took 30 coyotes off of that carcass. The closest I put a trap or snare I think was about 100 yards. I even went farther on trails. And that was on a small ranch. It was only 800 acres but that was a good one.” He said.

“I am certain he got his head right into that snare but he backed up and he took right off!”

One of the reasons that Hebbe likes trapping coyotes so much is that they fascinate him with their behavior. “I’ve seen coyotes come down the trail in fresh snow and see that snare and I can remember one, I can see it just like it was happening five minutes ago. He came down that trail, it was a cow trail, and he hit the skids and I am certain he got his head right into that snare but he backed up and he took right off and ran right up the hill full bore. I don’t know what the thing was but he was truckin’ and he almost got it! He slid at least I would say 10 to 12 inches on all four coming down that down-hill grade.” Ed remembers. 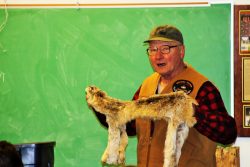 Always ready to pass it on, Ed talks to new trapper about furs – shown here holding a lynx pelt in Missoula, Montana.

In Ed’s experience a small lock on snares seems to be less noticeable to wary coyotes. “You get some pretty dad-gum smart coyotes once in a while. One year I got there and there the snare hangs and I was looking at that thing and there wasn’t any snow, it was early. I usually start at the end of October and there was the snare hanging there and it was chewed off and I thought ‘what the heck’ ya know and I figured it out that this coyote come along and got into that snare and he was very intelligent, he sat right down on the spot and chewed the snare in half – in two, and went on about his merry way.” Ed explained that this coyote did the same thing again the following year but was eventually caught by another trapper four miles away.

Few people other than trappers who have spent a majority of their lives studying the intricacies of the local ecology have such a vested interest in the land and its inhabitants, whether wild, domestic or human. Ed learned the habits of the deer and coyotes by observing the tracks in the snow while hunting and trapping. His familiarity with the area is remarkable – the result of more than forty years of wildlife study in close proximity to home.

Ed recalled one day when he had several snares set in a location where coyotes were funneled into tight draws perpendicular to steep ravines. Coyotes were drawn into the area in late winter following the deer herds. “They seem to run the deer downhill and they get them running down hill and right when they have to switch gears right in the bottom of the draw, that’s when the coyotes get on ‘em.” He explained.

Ed’s snare preparation method begins with boiling them in a solution of baking soda and water to take the sheen off then he cuts the tops of alder brush and sage brush to make another solution and boils both traps and snares in it. This solution turns his traps and snares dark and eliminates scents. In the same solution he adds pieces of denim for trap pan covers. The trap pan covers keep airspace under the pan to ensure the trap will fire when a coyote steps on it.

Once the traps, snares and denim pieces are boiled in the alder and sage he takes great care not to get any human odors on them. Ed doesn’t wax his traps because waxed traps “are hard on the finger!” Instead, he carries coal slack left over from local mines with him to bed his traps in. A piece of aluminum foil laid under his traps keeps the frost from fouling them. A strip of denim goes over the pan just before coal slack dust is poured over his trap. For a final touch, he adds waxed dirt over the trap to keep the weather out. Duff found under fir trees is a good substitute if he runs out of coal slack. This method gets his traps bedded solid and keeps them working even at extreme low temperatures. When the snow piles up Ed likes to spray paint his snares white. He once had coyotes avoiding one of his snares for half a dozen checks. After painting the snare flat white, that snare location began producing coyotes. 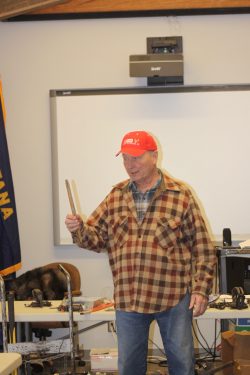 Ed Hebbe III teaching a trappers education class. Ed has been dedicated to promoting trapping for decades in Montana.

One year Ed’s neighbor was losing sheep to coyotes every night for several weeks. He was certain that one coyote was responsible for killing 30 sheep, the rest of which were now housed in a barn and not allowed to graze until the problem ceased. The coyotes had become wary of snares hung along the fence and Ed had to problem-solve. Instead of hanging the snare as he normally would, he decided to make the snare loop really big but tied monofilament fishing line across the opening. When that sheep killing coyote came through there the next night, the sheep killing ended.

“Trapping ain’t for everybody, nor is fishing or golfing or anything like that”

One thing Ed has taught me is that trapping is either in your heart or it isn’t. It’s that simple. “Trapping ain’t for everybody, nor is fishing or golfing or anything like that. I wouldn’t go chase golf balls around for any money in the world. And I’m not out there trapping because I make a lot of money at it. It’s something that’s in my heart. And I love them animals and I know what it is. I trap a few muskrats in the fall and in the spring time the rest are all dead. They die off [naturally] so I’m not hurting the population whatsoever.” He explained.

Ed Hebbe III epitomizes the trappers spirit as he passes along his torch that’s still burning bright after 70 years on the trap line and to keep that torch burning Ed’s message is clear; “Pass on the knowledge that you have to people, to young people, old people, middle aged people, anyone who will listen to you and can pick up on the knowledge and experience that you’ve had in all your life – and pass it on. That’s the way I look at it.”