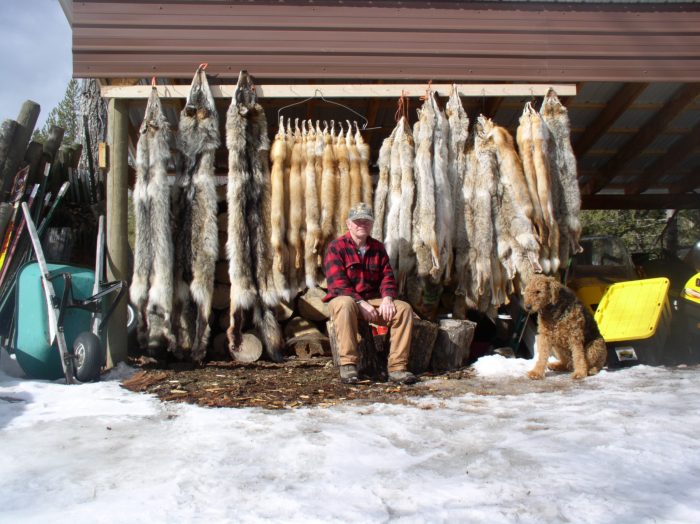 Trapping along the southern fringe of the Rocky Mountain East Front in northern Montana all winter isn’t on the top of every outdoorsman’s to do list but for Bob Sheppard this is the place he calls home and the place where he has run trap lines for decades.

Most of his trapping territory is wintering ground in the timber around mountainous terrain without much open ground, the area where he has developed wolf trapping skills that have surpassed most other trappers in Montana. But that doesn’t even begin to scratch the surface of this man’s accomplishments.

Bob Sheppard has been a fur trapper for well over 55 years who has done things reminiscent of mountain men like spending entire winter seasons trapping in the Bob Marshal wilderness with sled dogs and snowshoes. His involvement in trapping issues, education and outreach are outstanding demonstrations of his dedication to trappers and trapping. After serving in the Vietnam War as an Army soldier Bob returned to Montana and the wilderness. A graduate of the Fur Takers Trappers College, Bob traps nearly year round doing animal damage control and has an extensive history logging, guiding and outfitting, shoeing stock animals and now runs a successful sprinkler business. Bob traps because he says if he didn’t “then I would have to get a real job.”

When asked what his favorite wolf trap is his response was about what I would expect; “Well that’s a tough one because any trap that catches a wolf is my favorite trap.” He said with a laugh. “To be plumb honest I don’t have a favorite trap because I have a variety; Koros, MB 750s, sterling, Sleepy Creek 4 1/2 the Bridger #5 dog-less. I have yet to catch a wolf in a sterling or a koros but I hope to rectify that problem this winter. I have caught and held them in modified number 4 Montgomery’s too. 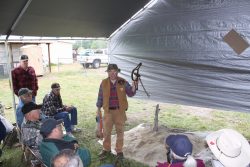 “At this point I am edging towards the Live Stock Protection trap but the jury is still out. I’m still looking for which one is going to be my trap of choice.” Bob said.

Once he does pick one particular type of trap he plans to switch out all or most of his wolf traps to have consistency but for now he says he is still experimenting. One thing Bob likes about long spring traps is how nicely they bed and the LPCs are made with cast jaws and don’t require much modification to be ready. But Bob always likes to tinker with traps to see if he can make them better.

Bob’s trap modifications are pretty basic and includes things like laminating if they need it, center swiveling, using in-line Springs and multiple swivels in the first 18 inches of chain. It doesn’t matter much to Bob if the D-ring is precisely in the center of the base plate but it must be on the bottom. Every trap is rigged so that he can quick link additional chain and drag when it’s needed.

For years he has tried different things like boiling traps in Logwood Dye and waxing versus speed dipping and with different brands. While they are all effective and useful he has developed a different philosophy when it comes to trapping wolves.

He spray-paints his traps and the first few feet of chain with white paint. His reason is that with the challenging freeze-thaw conditions he has noticed a distinctive difference when setting traps in the snow between a white trap and a dark trap. A white trap does not draw heat and there is a much better chance of the trap working for several days when there’s snow. A dark trap by comparison even when under the snow will warm up and melt the snow around it during the daytime and refreezes in the evening making the trap inoperable. “At this point I still have traps that have been boiled and waxed or dipped but most of them are white and in the next year or two I will probably have them all painted white.” Bob said.

He likes to get traps painted in the spring time so they can air out all summer but when that doesn’t happen he says a minimum of 2-3 weeks is necessary. When traps are clean and odor free he has not seen any avoidance of traps due to the paint.

Bob likes a night-latch pan design which he says is especially important when dealing with the heavy pan tension that must meet or exceed 10 pounds according to Montana regulations. He also likes to use heavy screens but tries various things throughout the season like waxed paper and at times he reverts to his old ways of stuffing grass under the pan to create an air space when he doesn’t have a pan cover.
When asked about his favorite set Bob quickly said “A scent post that wolves are already marking is hands down for me the most consistent set that I use especially when there is a wolf track right there that shows me right where to place the trap.”

He will add coyote urine on occasion but if there is fresh wolf urine already at the set location he usually won’t.
Bob also likes to use a wolf turd which he will pick up throughout the season. Gang setting with a variety of sets at good locations is common practice on his wolf line. He will use baits, lures and blind set combinations at a single location but in his area grizzly bears are often still roaming through his trapping areas in mid-December and a dirt hole set made with strong bait can act as a draw card for them. But, he says “that’s just one of those chances you take.” 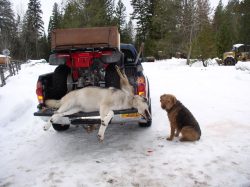 Ultimately his favorite set is a natural scent post followed by a set with some type of attractant. One thing he has noticed is that often times when he finds a place where wolves are scent marking under a large tree, that same tree also shows scarring from bears that scratched there during the spring and fall. “If you find one of them, that’s really good as long as the bears aren’t around because bears really like those trees but so do the wolves.”
Bobs wolf set locations are most often made right on existing sign but there are times when he will use a call lure elevated a few feet away with a gland lure close to the ground. This has a fringe benefit of sorts when moose come into the sets they will go to the call lure and not “smash the hell out of his traps.” Which Bob explains is really problematic at times.

In other situations Bob has buried a skunk in the area which acted like a call lure to get wolves into weather proof areas.

So what is the secret to Bob’s success? “That’s easy, catch the stupid ones!” Everybody likes dummies if they can catch the dumb ones they will have better success. The problem is figuring out which ones are the dumb ones!” Bob said with a laugh.

One thing that stands out when Bob talks is his knowledge of the outdoors and especially the areas he traps. When asked about pre-season scouting he paused for a moment and said “To me, scouting is just part of breathing.” He recalled an old fishing story when a guy named Jeff brought him steelhead fishing and Jeff told him, ‘You aren’t ever going to catch a fish if your pole is leaning in the brush and you’re off looking at tracks!’
Bob scouts all year but he says all wolf trappers need to get familiar with their equipment and make sure that their set is going to stay operable. That, he says is the biggest single problem. Traps must stay operable for up to several weeks during the season. Bob has had wolves go up to 27 days between visitations and says that no matter how much time goes by the trap must remain operable. 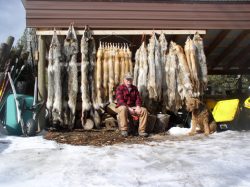 Bob recalls his best day trapping wolves when he caught three wolves within a mile of each other and other successes that gave him confidence in his abilities as a wolf trapper. But, perhaps the most impactful memories came when he spent days, weeks and months getting more and more frustrated when the wolves wouldn’t cooperate. Like one year when after patterning a wolf pack and getting all set up in a perfect location he waited the entire season only to have no wolves return. “They never, came, back! In all that time!” he said with the frustration in his voice even after a couple years have gone by. “And when did they come back and follow that same track? About a week after the season the season ended. That’s when I’m thinking ugh!” Bob says that the reason he doesn’t have any hair is because of situations like this. 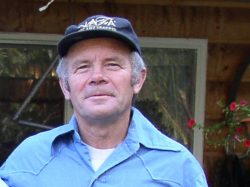 We can all learn from people like Bob. Their experience isn’t replaceable and can’t be attained without decades of firsthand experience. If you get a chance to sit down and talk to a guy with over 50 years trapping experience, sit down, shut up and hang on to your note book.