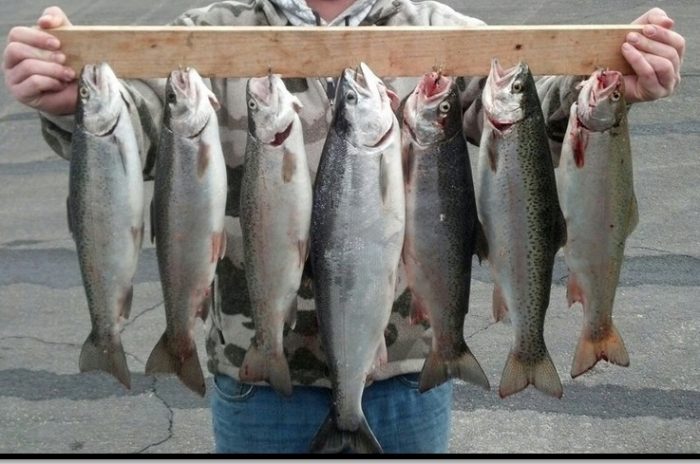 Being that this is the Montana Outdoor Radio Show’s website, we understand that people are looking for Montana news and information here.  However, the reality is that many Montana anglers do fish out of state, and many fish surrounding states regularly.  Just remember to make sure you have the proper license(s) and that you follow the regulations of the area you’re fishing.

So, for those anglers headed to Washington and/or Idaho, Adam Liere shared his fishing report in the Spokesman-Review for December 21, 2017, and you can check out part of it here:

Streamer fishing has been most productive on the Spokane River using heavy sink-tips to mine the deep slack water pools. Nymphing a stone/prince or worm has been good too.

The Clark Fork River is at a fishable level. Once again, go deep with streamers and nymphs.

Despite the low numbers of returning steelhead to the Clearwater River, Kyle Jones Sportfishing reports very good fishing on the Clearwater, with boats averaging 8 to 10 fish landed per day. The best success has come from side-drifting pegged beads and yarn and egg combinations. Info: (208) 861-0654

Safe ice for fishing is still at a premium. Avondale in Idaho is probably the closest right now to being fishable, with 2.5 inches of ice, but Avondale has a lot of springs, and it would be prudent to wait until after the predicted freezing temperatures have endured for a few days. Round Lake is ice-covered but only about an inch thick, and at Spirit Lake the bay at the boat launch at Nautical Loop only had ice from shore to about 10 feet out early this week. In Washington, Lower Twin is iced over, but not safe. The upper lake is open. Eloika Lake and others still needs a week of really cold weather. Waitts Lake remains fishable from a boat.

Some optimistic anglers are of the opinion Lake Roosevelt kokanee will soon make an appearance, despite a summer and fall with very few landed. A better bet is the rainbow fishing, which has taken up the slack and remains good most days all over the reservoir. Several outstanding reports came in this week from those trolling between Seven Bays and Ft. Spokane with numerous fish over 18 inches landed. The fish are still within 15 feet of the surface.

Two friends actually caught a kokanee – a 16-incher – out of the Hawk Creek Canyon on Lake Roosevelt this week, and it came on the first cast. After that, nothing.

Banks Lake rainbow are not as numerous as they were a couple of years ago, but the fish being caught run 2-4 pounds and larger. Rapalas, Owners and Apexes trolled at 10-15 feet have accounted for some quality fish.

Banks Lake walleye anglers were disappointed the torrid nighttime bite of last week didn’t continue this week, but it is common knowledge among walleye anglers that a bountiful catch is a matter of getting on a big school and staying with it. Points that drop off into 40-50 feet of water would be a good place to start. Go deep with blade baits, drop-shots or jigs tipped with worm.

Close to Banks Lake, Rufus Woods Reservoir was on fire for walleye on the flats in front of the net pens this week. Bottom bouncers and spinners and drop-shot rigs were equally effective.