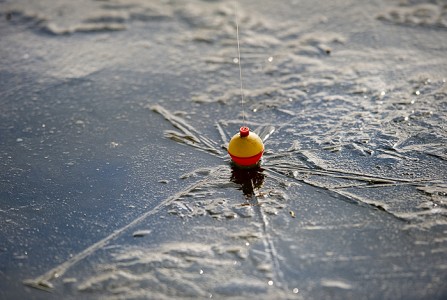 Linda   reports,”  We had fishermen this week.  The fishing was slow this weekend.  Even spearing was slow.   The excitement   was having a pickup go through the ice. It did not go totally under but we had to call someone to pull it out.  The guys drove on and off   many   times  driving  in the same tracks.  The last time they went off the tracks a little and that was it.  The ice is about a foot thick. You just have to be careful.  After that they   did not drive on  but walked on.  They ended up waiting until the next day to have it pulled out.   We have plowed   the road and access is okay.  ”

Raymond   said,” Fishing is hit and miss.   We have had  40 cars here this weekend.  The  fishermen I talked to said they caught a few fish.  Mostly perch in various sizes.  Most guys  were close to shore .  they caught a few crappie and some pike.  Most guys were catching with minnows from the Marina.  We have 12 inches of ice.  I  did not hear of  walleye being caught . They are walking or using a 4 wheeler.  Use caution. “

Wade says,”   We had quite a few   fishermen here   over the weekend.  I went out and caught only a few perch.  The report I got   was that fishing was hit and miss.  It seemed slower.  People were catching crappie and perch.  No one were   slaying them.  The guys were trying south across from the Marina.  Ice is 10 plus inches.  Guys are using 4 wheelers and snowmobiles.  The minnows I have right now are tiny 1 to 3 inches.  The crappies and perch were doing well.  People are catching northern pike. “

The Marina is open Friday, Sat and Sunday.  Our hours will be 6 am to noon each day.  I am getting   minnows right now.  I will have   worms. Mill worms, tackle, beer, pop and snacks.  If you want to know more information check out Tongue River Marina on Facebook.   This year   there will be no vending machine for minnows.

Clint says,” it has been a busy week for me. I have plowed 2 times all the way to town and 5 times half way to town.  We have had fishermen, right now we are full up.  They are catching northern pike and lake trout.  The walleye bite is pretty slow right now.  They are catching all everything at 18 to 30 feet.  The northers and lakers are going for smelt and minnows.   We have 10 to 11   inches the first half of the bay.  There is 8 to 9 inches west to Snow Creek and the main lake east is only 7 to 8 inches.  Guys are using 4 wheelers and side by side.  No pickups are going out.  Not much in pressure ridges   as of yet.  ”

Eddie  says, “  I am on the ice right now.  People are doing well on northern pike.  They are using live minnows in 12 to 20 feet depths.  The lake trout bite   was slow last   week. We were trying at depths of 80 to 110 feet.  Most guys were using a clacken rap or a 1 ounce slim bait.   Walleye are not being caught.  I know of guys who tried  for them for no 4 days and got no walleye and the other guys got 2 in that time.“

Marina reports,”There is 1 foot   of ice at Cooney at Red Lodge campground area.  Fisherman Point has 14 inches at the shore line and 8 inches in the middle.  The fishermen I talked to were fishing mostly on the south end has been real slow.  They said they are catching brown trout.  They tell me they have tried corn , minnows and artificial bait.  I have plowed the road.  “

Elmo still   has ice.  Perch has been what is being caught, mostly small ones.

There have been many fishermen out there this week. It is walk on only.”

Pat says,” we have seen a few  ice fishermen here this week.  They said they did not have any luck. We did see a couple of shacks on Broadview pond with guys trying to catch fish.  We have no idea if they got anything.  ”

When they fished that time they were fishing far  out and not close to shore. I suggested they fish near the shore.

Terry says,” The fishermen that tried fishing at Deadmans a couple of weeks ago came in again.  They went back this past week and stayed close to shore.  They caught some Kokanee at 4 to 5 feet.  They were snagging  the Kokanee around the boat dock. ”

Judy says, “ We went out on Bair this weekend. We did not get much. I got bites but just could not bring them in.  Others did fair. We used corn,  worms, and maggots  There   is 14 to 16 inches of ice all over on Bair. It is getting easier to get in and out.  I heard on Sutherland this week guys got 1 trout at 40 feet.  Someone said Martinsdale was slow and they caught one fish.  ”

Charlie says, “  On the East Fork guys are fishing well.  Maggots and small jigs are working.    The perch bite is up.

At Achley they are using  small jigs and maggots.  If you’re there you are catching fish.  The ice is good.

On Crooked Creek it has been quieter for action they are saying it is hit or miss.  Smelt and herring are working better than minnows on northern pike.  There have been some nice walleye caught as well. ”

Slim says, “This last weekend we had a lot of  fishermen here. They are already coming for this week end.  Fishing seems to be a tad on the slow side.  We have 16 inches of ice with some snow on it.  Some northern pike are being caught.   People are catching only a few   walleye, eater size, not big ones.  Also some crappies are   being caught.    Some people are 300 to 400 yards out with   4 wheelers.  You find them from 20 to 4 feet right now.  There is a pressure ridge building so be extremely careful.  The road is okay, a little slick in places but not bad. ”

Sharon says,” fishing has been  good and so has the weather. People have been catching   fish.  They  are catching perch, average  size one pouwalleye are good but not great.  Not the ususal.  nd. They are   finding   perch 40 to 60 feet at Duck Creek and Confederate.   The trout have been big.   There are some pressures   ridges building so stop at the Marina to get specifics.  Be careful.

The Broadwater Lions Club Ice fishing Tournament is this weekend,  January 27th and 28th, 2018.   You can sign up here on Saturday.  Call if you need for more information.  “

Jim says,” On Nelson there is good ice.  The ice is 10 to 18 inches deep. The ice classic fishing tournament is on Saturday this weekend at Nelson

Forchette  is slow fishing right now. There is 7 to 8 inches of ice in the bay and 5 inches at first point.  .

Stop by the store.  We do have bait, minnows and crawlers here if you need them.”

Jayce says,”Big Horn:  I was on the Big Horn this weekend.  There were tons of people fishing.  Caught some fish.

On Tongue people have caught a few perch and a few trout. Some say it is slower.

On Cooney I hear fishing was slow.   They are catching a few ling at night.

Bair: Some guys came in and said they caught lots of rainbows.

Crooked Creek:  At Crooked Creek the fishing is good. Some said they are catching walleye.  Word has it some guy caught a 25 pound northern pike.  Guys are doing real well.”

Rich says, “  the rivers are open but have lots of floating ice.

At  Canyon Ferry  guys are  sqying if you hit the right spot you can catch fish.  It is finding that right spot that is tricky .  They are going 50 to 60 feet down.  They are catching walleye but not real big ones.  The perch bit is hit and miss but if you do some are nice ones.

At Harrison guys are still catching.  It has slowed some.  I hear they are catching  rainbow trout, browns and brookies.  Only a few Kokanee.”

“The rivers are still not safe.  There is lots of   slush and shelf ice.  You just cannot safely get close.  You  might find an opening but they are few and far between,” Chris says.

Collette  says,”  The cfs is at 4,000.  The water has  very good clarity  clear. The hatch is over. Fishing is good, good winter fishing.     For  streamers  use dirty hippies.  Use a full sinking line in deeper water.  Try a thin mint or a vanilla wafer.”

Alice says,” the sunny, warmish days are seeing midges hatching.   We have seen no winds so some fish are rising. Otherwise nymphing is the way to go, two flies, one chunky and one small should do the trick. If the water is deep try streamer fishing as it can be effective on the warmer days..”