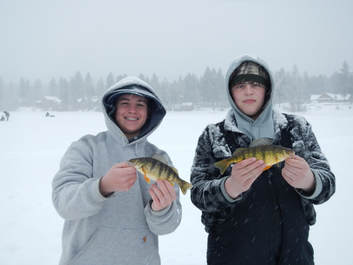 Thank you to Snappy’s Sport Senter for sharing this fishing report dated 2.21.18:

Lots of good ice, but plenty of snow as well. Most lakes are seeing between 8”-12” of good solid ice.

Lower: Good Perch (8”-12”) at the East end in 30’-40’ water. Also, good Trout near Outlet Creek. Few Pike in the bays being caught on smelt or dead bait.
​
Upper: Hearing about lots of smaller Perch in 5’-10’ water with some bigger fish closer to the 10’ depth. Few good Pike reports as well.

​Bootjack / Cibid Lakes:
Reports of good number of Trout in the early mornings.

Crystal Lake:
Good Salmon 200yrd out in front of the boat launch. Also getting reports of a few good Perch and Rainbows mixed in.

Little McGregor:
Lots of small Perch and some Rainbow reports.

Lake Mary Ronan:
Good Salmon action in the early mornings with some nice fish reports of up to 14”. Also, good Perch near Sunken Island or Camp Tuffit down about 20’-30’.

Ashley Lake:
There is a bit of snow making it difficult to get in to fish. But it had been fishing very well.

Smith Lake:
Still getting reports of a few good Perch and lots of small Pike reports.
Whitefish Lake:Only about 6”-10” of ice. BE CAREFUL! It had frozen, but then lot of snow cover insulating the ice. We are getting good reports of nice Lake Troutand Whitefish.

McGregor:
It is frozen from West end to Boisvert’s boat launch. The West end froze last, so watch that area carefully. A 27lb Lake Trout was pulled out last week and reports of some other nice fish as well.