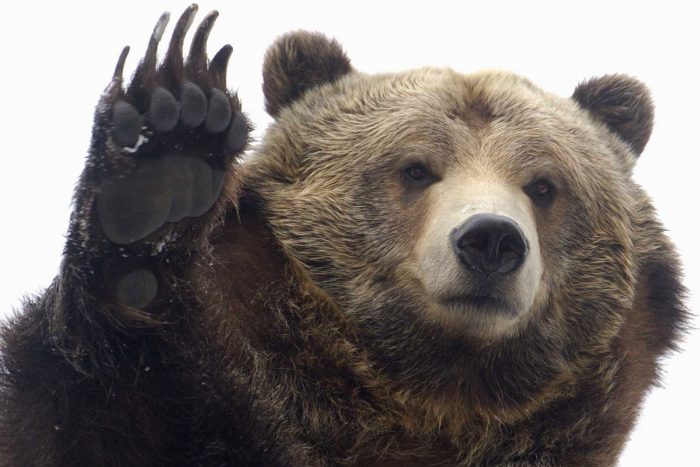 Something huge could be happening in Wyoming.  For the first time in over 40 years, a grizzly bear hunt could take place in the state of Wyoming if commissioners who oversee the state’s wildlife sign off on a proposal released Friday, according to Jackson Hole News & Guide.

the hunt is being devised in a way that state officials hope will limit the chance of the bold large carnivore being shot in public view, or killed adjacent to Grand Teton National Park. A no-hunting zone will abut the east boundary of the park, and throughout the Greater Yellowstone Ecosystem it will be illegal to kill a grizzly within a quarter-mile of a named highway, Wyoming Game and Fish Department Chief Warden Brian Nesvik said.

Here are some details of the hunt:

Half of the overall statewide quota — 10 male bears and two females — is being distributed among six hunt zones that fall within a 19,279-square-mile “demographic monitoring area” in the Yellowstone region’s core. Another 10 boars and two sows will be targeted outside this area, in zone 7, which encompasses outskirts of the ecosystem where the federal government is not imposing limits on hunting.

The rules on hunting outlined in the draft regulations greatly differ inside and outside of the monitoring area.

To ensure that no more than two female bears are killed, a maximum of two hunters at a time will be allowed afield within the monitoring area.

“People will put in for a license, but we will only take the top two on the list,” Nesvik said. “They would essentially be able to choose any of those six hunt areas up until the time either the female mortality limit is reached, or the sub-quota for that particular area is reached.”

Hunters pursuing grizzlies in the monitoring area also must carry a Game and Fish-issued satellite device that sends text messages. When a bear is killed, they’ll be required to report its death and the sex immediately.

“Let’s just say that the first two hunters harvest male bears,” Nesvik said. “When they’re done, then we’ll send the next two guys or gals out the door. And we’ll keep doing that until either the season ends, the female mortality limit is reached or the total mortality of females and males is reached.”

When will the season be?

The legal season for grizzly bears will be Sept. 1 through Nov. 15, and the state has for now ruled out a springtime hunt, which exists for black bears. An application period for the lottery will go from July 2 to 16.