Tales and Trails: Too Much Water (by Bruce Auchly-R4 MT FWP)
By angelamontana

This year when winter ends, and yes someday it will, talk will turn from snowfall and ice depth to snowmelt, runoff and flooding.

We may not like floods, but they serve a purpose in nature. Whether birds, amphibians or fish, many prairie wildlife species profit from excess water.

Which brings us to the basic question: Can you ever have too much water?

If you build in a low lying, flood prone area, the answer is likely in the affirmative.

For critters inhabiting a prairie-river ecosystem, the answer is there’s no such thing.

Take fish. No water is no good, of course, and too little water can deprive some fish, like trout, of oxygen and cover.

But what does too much water do?

When flooding pushes a stream or river out of its banks, it creates additional pools, channels and backwaters. Those areas quickly become habitat for insects (can you say, mosquito?) frogs, birds and fish.

Not all fish quickly rush into this new address. However, bullheads and pumpkin seeds (members of the catfish and sunfish families) are two species that commonly seek out newly flooded habitat. Rarely do you find trout in slow moving overflow. Not many trout get stranded when flooding ceases and the excess water turns still and stagnant.

That’s because trout prefer more flowing, oxygenated waters. Perhaps that’s one of the reasons members of the trout family are not native to much of the Great Plains.

In addition to fish, flooding moves river bottom gravel and stream sediment, sometimes lots of it. That can rejuvenate a stream bed, but there’s always a threshold when the helpful products of a flood turn to massive erosion, scouring a streambed or over widening a channel. 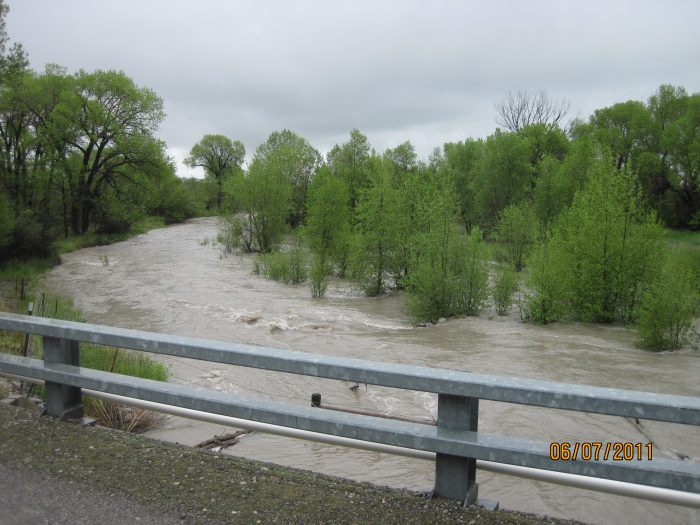 When the Teton River flooded in 2011 it moved river bottom gravel and sediment.

Consider the 1964 flood that drastically changed the look of some Montana waterways. Scars of erosion and scouring are still evident from the Teton River as it spills out of the Rocky Mountain Front to the Middle Fork of the Flathead west of the Continental Divide.

This year, melting snow and even average rainfall should make for tremendous runoff in the tributaries of the Missouri River, primarily by June. Torrents of rushing water can disrupt and destroy redds (fish-made depressions in the streambed where trout deposit their eggs) or dash very young fish against rocks and kill them.

If that destructive threshold is not crossed, flooding can remove silt and sediment that has built up in a gravel bed. That could leave a river or stream better suited for redds and successful spawning.

Of course, this scenario changes the moment we introduce engineered structures like dams. Take Holter Dam on the Missouri River as an example.

The Missouri downstream of Holter is not a freestone river anymore. It’s a tailwater. That means floods don’t move gravel around as much as just move gravel out.

Eventually flooding in such a system hits bedrock or makes a river too deep for spawning. Typically, trout need shallow water for their redds; any water deeper than six-feet is too deep, doesn’t have the necessary oxygen.

To be sure, structures such as dams are not bad. It’s just that everything has consequences: from not studying before a test and, well, you know; to our current cold and snowy winter that may lead to flushing silt out a gravel bed and successful rainbow trout spawning.

(Feature photo caption: Flooding can be destructive to manmade structures, like in 2011 when the Mussellshell River overflowed its banks.)