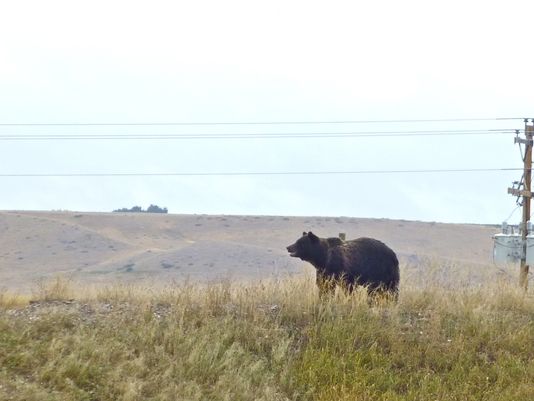 A curious grizzly bear wandered into a garage near Great Falls and is now dead after eating insecticide.  According to the Great Falls Tribune:

The sub-adult female bear was about 11 miles northwest of Carter, which is between Fort Benton and Great Falls. The female had been seen in previous days traveling with a sibling bear and getting into available attractants along the Teton River. The sibling is still believed to be in the area.

“We’ve been tracking the sub-adult grizzly group for the last two weeks,” Wesley Sarmento, Fish, Wildlife and Parks bear management specialist, said. “We’ve been trying to capture them because they’ve been getting into pet food and grain spills. They’ve been in the north-western part of Carter for about five days.”

Sarmento said they are still working to trap the second bear.

The bear that died was about 143 pounds and died within hours of ingesting several different kinds of insecticide. The carcass will be taken to FWP’s wildlife health lab in Bozeman to confirm the cause of death.

To read the full article in the Great Falls Tribune, click here.