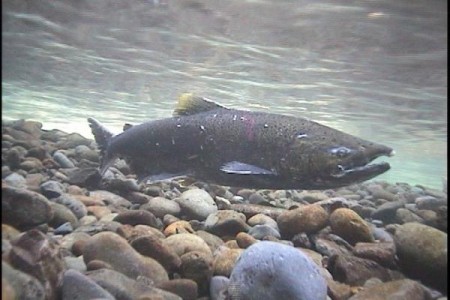 Chinook Fishery Update in the Upper Salmon River 7.12.18
By angelamontana

Here is a message from Greg Schoby with Idaho Fish & Game with a Chinook salmon fishery update for the Upper Salmon River:

The upper portion of the fishery from the Hwy 93 bridge south of Challis upstream to Sawtooth Hatchery closed on Saturday 7/7/18 at the close of fishing hours. It was quick fishery with lots of fish caught in the upper river. During the last week of this fishery, catch rates were good, and anglers harvested an estimated 185 adult Chinook, bringing the season total to 392.  It was a short fishery due to the low number of adult Chinook we had returning to Sawtooth and some hot fishing, but I’m happy that anglers were able to get out and make the most of it.

The section of the Salmon River from Ellis (mouth of the Pahsimeroi) downstream approximately 6.5 miles to the Colston Corner boat ramp opened to Chinook angling on Saturday 7/7/18. This stretch of river was quite a bit different than the upper river  – in this fishery Chinook anglers averaged an estimated 57 hours per Chinook salmon caught and 75 hours per Chinook salmon kept. We estimated a total 13 adult Chinook harvested during the opening weekend of this fishery (see table below, provided by Jon Hansen and Brent Beller)

River conditions remain good throughout the upper Salmon River, but the weather certainly isn’t helping.  Air temps have been in the 90’s since the end of last week and it doesn’t look like it is supposed to cool down anytime soon.

On a brighter note, tomorrow (Friday) the Pahsimeroi Hatchery staff will be recycling ~100 Chinook from the hatchery back into the Salmon River to give anglers another shot at them.

Thanks, and best of luck to all!