This week the 124th Montana State Trap Shooting Tournament will take place at the Great Falls Trap Club. This is a 5 day competition comprised of 1300 ATA registered targets. The tournament rotates each year between the Great Falls, Missoula, Helena, and Billings clubs. It attracts hundreds of competitors. With the exception of 1945, this has been an annual affair for Montana’s trap shooters since 1893, and no, I didn’t compete in the first one, but I do remember setting targets. 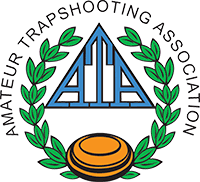 Wednesday, July 11th starts off the state shoot with singles, doubles, and handicap 100 target events. Think of this as a warmup for the championship events that come later in the week.

Thursday, July 12th begins with a 100 target singles event, followed by 100 handicap targets. The day ends with the first championship event, the Montana State Class Doubles Championship. 14 class trophies will be awarded to the winners.

Friday, July 13th opens with the first all-state title, the Montana State Doubles Championship. While there are numerous class and category awards, the winner of this event will be the Montana State Doubles Champion. After the M.S.T.A. general meeting, competition will resume with the State Singles Class Championship competition. The Scheels Handicap 100 target event completes Friday’s shooting.

Saturday, July 14th is the penultimate day of the tournament and starts with the first half of the 200 target Montana Singles championship. The first 100 targets on Saturday set the stage for the second half’s 100 target finale on Sunday. This event is followed by the State Preliminary Handicap’s 100 birds. Saturday’s competition finishes with the venerable Butte Rod & Gun Club Medal competition, more on that in a moment.

Sunday, July 15th, the final tourney day, begins with the second half of the State Singles Championship and ends with the premier event of the tourney, the Montana State Handicap Championship.

To win any one the Montana State Championships a shooter must be a Montana resident. The shoot is open to competitors from other states and countries and awards are given to those non-Montana shooters, but again only Montanans can win a state title. There is over $ 25,000 in added money and trophies to be won. 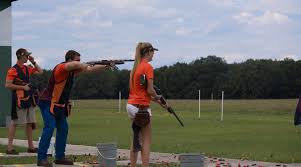 Now a little bit about the Butte Rod & Gun Club Medal. The “Butte Medal” competition is a non-ATA event; it is open to any Montana resident. It consists of 15 twenty yard handicap targets, 15 twenty-two yard handicap targets, and 10 doubles targets for a total of 40. This event is a bit of a throw-back to the early days of trapshooting when the events were shorter in length and quite often sponsored by various entities. The “Butte Medal” was first contested on May 21, 1898 with a purse of $ 150.00 and it was won by J.F. Cowan. The medal has been contested in every state shoot since and this year’s purse is $2000.00. The medal itself spends most of the year in a secure bank vault, it is valued at about $ 50,000. The winner receives a very nice plaque and a single gold bar with the winner’s name is added to the long line of bars of past champions. If you are a Montana state citizen, you too can compete in this iconic Montana competition; come give it a try. 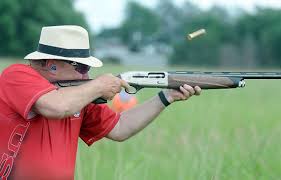 Just a little personal note; the “Butte Medal” means a great deal to me. Three of my four sets of great-grandparents immigrated to the Butte-Anaconda area. My dad was born in Butte; my family’s roots, like so many other Montanans, are planted in Silver Bow country and that history is a special part of my pride in being a Montanan.

If you are in the Great Falls area this week, check out our State Tourney, you’ll have a great time.